The Summer of Beer and Whiskey Book Review 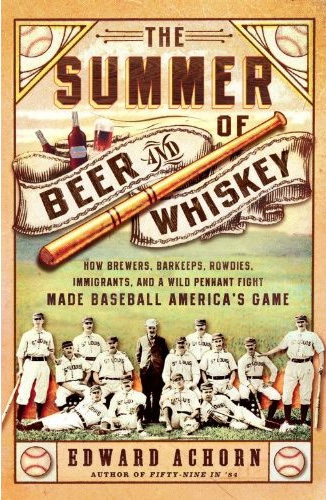 On its surface, The Summer of Beer and Whiskey is a book about the birth of the upstart American Association baseball league in the 1880’s and about Chris von der Ahe, the eccentric owner of the St. Louis Browns who purchased the team so that he could sell more beer.

That in and of itself might make for an interesting story, but one with limited appeal if you’re not interested in baseball or historical novels. But baseball, despite being the focus of and backdrop to the entire story, is not what you’ll remember after reading this book. Rather, The Summer of Beer and Whiskey is a book about people, and it’s those characters that will stay with you long after you’ve turned the final page.

At the center of the story is von der Ahe, a German immigrant and beer garden owner who gambled that he could sell more beer by buying a baseball team and hosting Sunday games with cheap tickets and plentiful alcoholic refreshments. What was initially dismissed as the “Beer and Whiskey Circuit” soon blossomed into a full-fledged league that came to rival the established National League and helped breathe life into a dying sport. As the American Association grew in popularity and talent, it began to clash with the National League while ultimately erupting into a national frenzy of fandom during the 1883 pennant race.

Author Edward Achorn weaves newspaper quotes from the era throughout the book like they’re character dialogue, which means that instead of a dusty historical retelling, you’re reading the authentic language of the time from the people who actually spoke it. The result is an utterly charming read with a real sense of atmosphere that serves to connect you with these ballplayers from a bygone era. Prior to this book, I really had no interest in the late 1800’s, but the dialogue and the way that Achorn seamlessly transitions between quotes and providing context had me completely engrossed form start to finish.

Often times, I found myself taken aback by the medieval nature of early baseball – referred to as base-ball back then – and of the time period in general. Players played without gloves or helmets and suffered gruesome injuries both at the plate and on the field as a result. Several times throughout the story players were struck in the head with pitches, oftentimes being described as falling like they’d been shot, only to stagger back to their feet and resume play a few minutes later. Team employees would cover their teams for the local papers, a clear conflict of interest by today’s journalistic standards. Pitchers would often pitch multiple days in a row until their arms quit from exhaustion, and games were sometimes so crowded that spectators would line up along the outfield to watch. Humorously, teams would agree that any balls hit onto these crowds, who were standing on the field of play, would be considered doubles.

Achorn also reveals a darker side to America’s pastime. Players were often drunkards who would even show up to games inebriated, and cheating to take advantage of the one umpire who presided over the game was common. Racism was also rampant, with African-American bat boys being treated as mascots or good-luck charms and one American Association owner who made his money by performing in blackface. It was uncomfortable growing attached to and rooting for some characters, only to realize that they shared in the views that were sadly commonplace during that time period.

Darkness aside, the story as a whole is fast-moving and massively entertaining, with von der Ahe’s Browns vying with the Philadelphia Athletics for the 1883 pennant until the final week of the season. It’s a pennant race rich with drama, and perfect for Achorn’s style of storytelling, as the newspaper reports capture the feverous levels of fandom gripping both cities as each crucial game played out. I found myself rooting for one team just like any other fan would, completely caught up in the wins and losses and cheering when they ultimately triumphed.

I really can’t praise The Summer of Beer and Whiskey enough, as it is truly one of my favorite books that I have ever read. Don’t let the topic of baseball pigeonhole this title, there is something that anyone and everyone can enjoy in Achorn’s masterful retelling of one of the more colorful episodes in sports history. 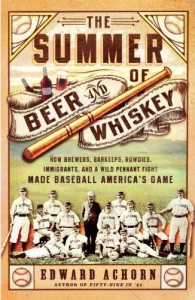 (This book was reviewed with a copy provided by the publisher)

(Cameron Gidari is a freelance writer and the author of Seattle Before8. Follow him on Twitter at @CGidari)