Sam Raimi (The Evil Dead, Spiderman) directs Oz the Great and Powerful, a film that stars James Franco and Mila Kunis. Franco is Oscar Diggs, while Kunis is Theodora (The Wicked Witch of the West in the original film). The film is rounded out with the inclusions of Rachel Weisz as Evanora and Zach Braff as Frank (the winged monkey who acts as guide for Diggs). A large heaping of beautifully-designed computer graphics and costuming make Oz the Great and Powerful a fully immersive experience. While the title ends with a solid conclusion, I feel that the realm that L. Frank Baum created with eir Land of Oz could be more fully captured with additional titles in this franchise. Viewers young and old will appreciate what Disney has done here, and will be similarly impressed with the treatment that this combo pack (Blu-Ray, DVD, and Digital Copy) has gotten.

There are a number of bonus features that are present on the Oz the Great and Powerful combo pack. The bloopers will showcase a more human side to the cast and the cry, while there is a historical feature that delves into Walt Disney’s fascination with the Oz mythos. Before Your Very Eyes: From Kansas to Oz is an all-too-brief view into the design that melded and ultimately created the world of the film. Finally, limited editions of this combo pack come with a free movie admission to Disney’s The Lone Ranger, which will be in movie theaters on July 3rd.

The Oz the Great and Powerful combo pack can be purchased at a wide selection of video stores and from any online retailer that deals with movie releases. Visit the Disney website for a number of additional activities and further information about their properties. 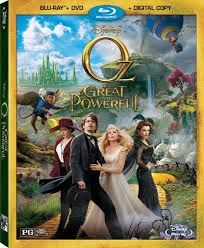