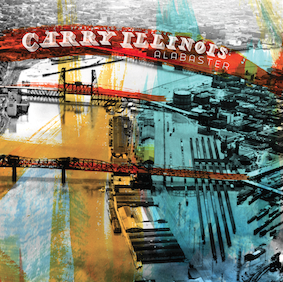 “Alabaster” is an album that means a lot to me in terms of my personal growth and journey in professional music throughout the past seven years. I am so proud to have released this set of songs and to have finally come into myself, my style, and to have found my true voice.  I wrote the album throughout a serious bout of depression, a difficult band break up, and witnessed a friend lose her father and another separate from his longtime girlfriend.  Alabaster was the light at the end of the tunnel and it is a great joy to be able to share the music with all of you.

It seems highly fitting that our first video be for the title track of our new record “Alabaster.” We shot the video on a rainy February weekend out in rural Dale, Texas at our friend Josh Ball’s ranch.  Before even getting started on the recording and filming, we found out that our guitar player would be bringing a dog that he was pet-sitting, our keyboard player had to bring his rabbit and dog due to a gas leak at his house, and Josh Ball already had two resident cats and a dog. It was a wonderful bonus that we would be filming amidst actual animals considering the theme of the song “Alabaster.”

The song is about an alabaster owl that was gifted to The Blackwells (the previous project I was involved in).  I often like to look around my immediate environs for inspiration and the owl caught my eye.  I wanted to bring life and a story to this beautiful inanimate object.  One of the central subjects in the song is that animals are much wiser than we will ever know.  The song is also about the complexity and struggles that life brings for all creatures: “You stay at rest as we wrestle the beast. You tend to the family as we grasp for relief.”  “Alabaster” stands out as one of my favorite songs I have written thus far.

It was really special to have the chance to film and record a live version of the song in such a unique setting.  Since we filmed over a whole weekend and stayed out at the ranch, we were able to dig deep into the emotions and each band members’ connection to the song.  We captured the power of the group playing together in a classic ranch house setting with a psychedelic light show.  To contrast that feeling, we represented the intimacy of my music through a solo performance amongst candlelight in the cold.  We were very lucky to have to chance to work with Josh and his talented crew (including Ben Bloom from amazing Austin, TX. based Onion Creek Productions). We began filming two other live videos at Josh Ball’s ranch in addition to “Alabaster”, so keep an eye for those later this summer/early fall!