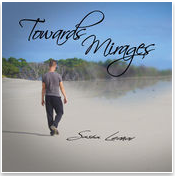 Sydney, Australia’s own Sasha Leonov has crafted a unique style of music that has been continually evolved since the 2009 release of his first album Accolades For Days of Sunshine. Moving from piano compositions to a fully-fleshed out set of music and lyrics with 2012’s Remnants of Tomorrow, Leonov was able to expand his repertoire with 2013 Skies Change. “Believe Once More” is a tender composition with a deliberate percussion and soft accompaniment. Leonov is able to establish a narrative that is further through the instrumental and vocal sides of his music. Cicaca Chorus is more introspective and contemplative; the track’s deliberate path further increases the song’s replay value as one will continue to hear different twists and turns added to the effort. Skies Change concludes with The Sun is Shining Through, a track that acts as a solid conclusion to the trends and themes broached during the album while giving listeners some semblance of where Leonov will go on subsequent recordings. The body of Leonov’s discography needs to be fully enjoyed to understand each facet of the performer as each set of compositions are crafted by a different Leonov. As Sasha continues to experience, journey, and find inspiration for his music, the resulting efforts show further progression as a musician. This is not to say that his early releases are not to the same quality as efforts like 2015’s Towards Mirages – just that the influences and approaches are wholly different from 2009 to 2015.

Leonov’s music on each release forces listeners to remember back to what they were doing at a similar time period; it is this introspective ability that separates Sasha from other singer-songwriters that are creating music. Towards Mirages is a strong effort from the beginning of the album (the one-two punch of Rise and Mirage) to the different straits in which listeners will find themselves during First Snowfall and Beauty in Fragility and finally to the last strains of Traces. Each song has something important to say about Leonov the performer, but the beauty of Towards Mirages (and the rest of Leonov’s discography) comes in the different messages that are shown to listeners patient enough to complete the full album.

For more information about Leonov, purchase links for his albums, and samples of his music, visit his domain. We have sat down with his Toward Mirages album and reviewed his Spring Into My World  single earlier this year.