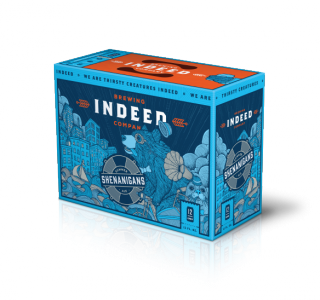 Shenanigans Summer Ale is Indeed Brewing’s latest seasonal, and it looks to capture the lawnmower beer market. At the base level, there is no denying that Shenanigans is able to revamp the wheat ale format in a fashion that few beers can. The ale has a good amount of wheat and grain elements that are married to a small hint of bitterness at the conclusion of each sip. Shenanigans pours with a yellow coloration and a good amount of offwhite head that sticks around for a decent bit after pouring. The nose yields hay and grass notes, while the first few sips showcase a citrus bite that gradually fades as Shenanigans Summer Ale begins to approach room temperature. The brewery utilizes Sorachi Ace and Lemondrop hops to push on the more floral and grassy side of things; a low IBU (14) ensures that even those that are not a fan of overly-biting beers will be able to find something that they appreciate in Shenanigans Summer Ale. The inclusion of honey makes for a slightly sweeter brew but it acts more as a counterpoint for the hops rather than making the effort cloyingly sweet.

I’d like to see a little more in the way of hops included in the brew, but would gladly pick this up for all of the pool parties and social gatherings that will be occurring over the hottest months of the year.

We reviewed Indeed’s Rum King late last year and 2016 LSD a few months back; one can find information concerning the full list of Indeed efforts on a seasonal and year-round basis from the brewery’s domain and social networking websites.

Shenanigans Summer Ale is available in 6 packs, 12 packs and drafts from March to August in Indeed’s distribution footprint.