Gerry Dantone of UniversalDice sits down with NeuFutur 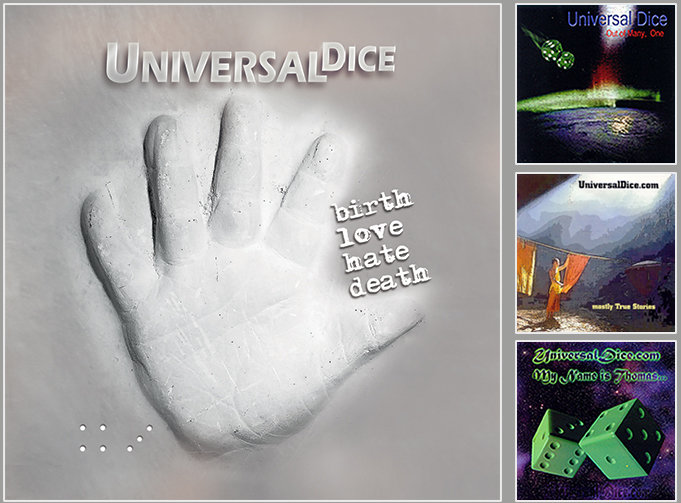 Today, we are speaking with UniversalDice. Can you give us a little background information about yourself? How did you get into music?

I’ve played music since I was 5 years old; in elementary school, my family was offered a choice of instruments for my musical education – accordion or guitar.  Of course, they chose that I learn the accordion.  I always joke to myself that if they had chosen guitar for me, I’d be Pete Townshend today.

Accordion did not turn out to be the answer for me but in a few years, I was in the school orchestra playing 1st violin.  I was not the best violinist in the school but I was OK.  At some point, I suffered 3 broken arms and that was it for regularly playing violin.   That was probably it for being a virtuoso string instrument player as well.  I broke my left arm one more time as an adult for good measure.

In late high school and early college years I started fooling around with an old acoustic guitar I found in my parent’s house and eventually bought a really cheap Univox guitar while in college with money I won playing pinochle.  Almost immediately it was obvious I wanted to write songs even before I knew how to play.  The rest is history, such as it is.

You have just released a rock album, birth, love, hate, death; what was the writing/creative and recording process for the album like?

The process begins with ideas; I had written some songs over the years that suggested some characters, a young man and a young woman who interacted in an interesting way.  The idea was to grow these couple of songs into a rock opera and tell a story about love; in this case from birth to death and all the love and hate in between, hence “birth, love, hate, death.”  It was going to be a tragedy because it’s more compelling and more real, in my opinion.   After writing more songs, it became apparent what gaps existed in the story; when that happens you then become motivated to fill the gaps and complete the story.  Telling a story definitely (for me) makes writing songs easier.  Having a story to tell brings focus to the writing process.

We’ve recorded all of the UniversalDice albums ourselves.  The first two CDs, bassist Sam Cimino and I shared the writing, recording and production duties with help from keyboardist Tom Beckner.  I’ve handled the production of the last two CDS myself with help from lead guiatarist Bob Barcus on many songs and on “blhd” from Vin Crici on 4 tunes.  The first two CDs were analog, the 3rd was both analog and digital, and “birth, love, hate, death” entirely digital.  We did it all from recording, mixing and mastering.  Bob and I usually handle the artwork, with Bob handling the more technical aspects. Sam played bass on much of the first 3 CDs, and Eddie Canova has handled it since then.  On “blhd” both Vin Crici and Walt Sargent handled the keys.  Thank goodness for digital; you can do so much more without breaking the bank.

The album art is fascinating; what significance does the hand/design hold for you?  How does birth, love, hate, death differ from your previous music? What sort of things are a hold-over from earlier recordings?

The hand imprint of the cover represents “birth.”  It’s the imprint of an infant.  It seemed to be a good way to start the experience of the rock opera, “birth, love, hate, death.”  It happens to be my daughter’s imprint.

This album is different because it’s about love, and pretty much only love.  Previous albums dealt with faith, reason, religion, social issues, war, peace, etc. with some loves songs scattered about incidentally.  This is about love.

What will always be the same in UniversalDice albums is humanism; the theme of caring about what happens to others will always be the philosophical underpinning.  This may seem typical, but it really isn’t.  These songs are NOT obeying a god, a moral code, scripture, social norms or other commonly held beliefs; they are about caring about others, what happens to others and trying to contribute somehow to a better world.  In this album, the point is that love is NOT something you merely feel; love is a pattern of behavior of helping the ones you love.

One local magazine, Good Times Magazine, has always been nice to us but generally it is most difficult to get something going in the local music scene with original music.  People need to know your songs before they come to see you and additionally our material is not well suited for playing the bars and clubs.  It may rock but there’s a little too much going on.  Part of what we do is provoke thought – that’s difficult in a club setting.

I’ve played clubs – CBGBs to Malibu Beach Club to Great Gilversleeves to My Father’s Place in the NY metro area.  It’s just not our optimal setting.

I use a PC running SONAR for recording and use SoundForge to master.  I have all kinds of effects from Waves and other companies.  I use the POD and SansAmp for guitar sound and Bob uses a miked boutique amp for his sounds.  We used a SansAmp for bass with Eddie to go direct.  I know Vinny uses a Korg for his keyboards and I have other various modules for keys with Walter.  I also use a Seck mixer for routing my set up and the whole thing occupies about 30 or 40 square feet in my den.  I own only 2 electric guitars and one acoustic – I am not a collector.

The Beatles, the Who, Pink Floyd, Cream, Simon & Garfunkel and other bands from the ‘60s and ‘70s form the basis of my musical education.  I love bands like Muse, the Killers, Green Day and Radiohead from more recent times.  I would love to play with the Who, but I am not worthy.

Facebook seems to be the best format for me to communicate with potential fans.  Twitter’s 140 characters would be totally inadequate.  I am not visually oriented so other photo/video based social media is not my strong point.

We have a 5th album in our future – it will be about “family.”  It will rock.

Our music is everywhere it can be, iTunes, Amazon. Spotify, CDBaby and 20 or more other outlets.  Our first 3 albums may be attributed to “UniversalDice.com”, which are “My Name is Thomas…”, also a rock opera, “mostly True Stories” and “Out of Many, One.”   Our latest CD, “birth, love, hate, death” will be listed under “UniversalDice.”  You can get physical CDs via CDBaby and digital everywhere.  The best starting point is our web site; www.UniversalDice.com .

What does the rest of 2017 hold for your music and tour date wise?

Since our rock opera is best enjoyed as a rock opera, we are working with a local theater/performance art school to get it staged and take it on the road to appropriate venues as a real production.  To get that done would be a dream come true.

I’m sure you want to know where did we all come from
You want to know what comes after this?
The secret’s in the way you live, not in kingdom come
May you live to taste your love’s sweet kiss
My sweet darling, my sweet child
The road is winding and the weather’s wild