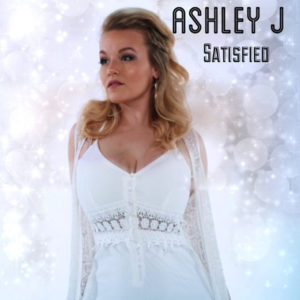 It has taken Ashley J a few forays down dead end streets for her to find her way, but her wholehearted embrace of the pop form has proven to be the ideal vehicle for her considerable skills. The latest result of her pop oriented direction, “Satisfied”, is a highly polished single that nevertheless pulses with real warmth and life rather than sounding like the sterile sort of product often pushed by her contemporaries. She has a big, brassy voice capable of dominating any musical piece, but a significant part of her artistry lies in her ability to play to a song’s needs rather than imposing her will on the proceedings. Her singles cut in Nashville and those preceding this new track are universally fine, but they sound like entertaining dry runs preparing her for the excellence she explores with this release. “Satisfied” is wholly satisfying, on every level, and guaranteed to please its intended audience.

The center of the song, naturally, is Ashley’s voice. You can definitely detect the stew of influences that go into making her the performer she is by the time you’ve finished your first listen. She’s equal parts pop diva in the making along with possessing genuine R&B/soul chops and even a fleeting hint of bluesy gravitas. Her phrasing, likewise, goes far beyond her years. She knows exactly what passages to vocally underscore for effect, when to soften her approach, and how to bring out the most of the song’s crescendos so that the possibly disparate pieces of the song add up, instead, to a greater whole. It certainly helps that the song’s lyrics are so well crafted – they manage to lock up nicely with the arrangement while still staking out some ground to say something meaningful. It’s not easy. Most songs of this ilk rarely aspire to say anything particularly meaningful, but “Satisfied” is the rare cut that addresses familiar subject matter with personal zing that, nevertheless, still connects with a wide audience of potential listeners.

The arrangement could have ended up serving as merely a vehicle for her vocal, but Ashley J and her collaborators aspire to more. As a result, the electronically propelled arrangement for this song swells and pulls back in all the right places and orchestrates those dynamics in such a way that it helps draw listeners deeper into the song’s web. It isn’t quite as conventional as some songs in this style, but the chorus comes with plenty of punch and the lulls built into the tune come surprisingly early and give the song an unusual level of balance we don’t ordinarily hear from such material. The tempo keeps things lively throughout as well and more than matches the energy she brings to her performance. Ashley J’s “Satisfied”  continues the torrid clip of high quality music coming from this performer and, as an early taste of what’s to come from her next EP release, the song promises quite a bit for a studio recording that’s certain to deliver even more.