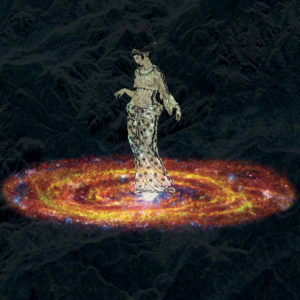 Andromeda is the new album by New Jersey’s Undercover Rabbis (we previously covered their 2015 disc Electric Sand and their 2014 work Empires). The first thing that listeners should know is that Andromeda is one of those albums that are considerably better if you’re able to just sit back with a pair of headphones on. There are so many things occurring during each second of the album that even losing focus for a seccond will cause fans to miss something important.

Follow the Wind is the first track on Andromeda, and the resulting track blends equal parts Candlemass, Wolfmother, and Alice in Chains. Hard, harsh, and intense in arrangements, the track will sent listeners on a psychedelic-tinged journey.The guitar work evokes comparisons to Jack White and Black Album-era Metallica. We’re a particular fan fo the instrumental breakdown that occurs at about the three minute mark of Follow the Wind. Moving from a very singular sort of sound, the band is able to incorporate additional elements beyond the guitar until the act is hurtling on to the second half of the song.

While Guns is the shortest track on Andromeda (clocking in at 5:25), the deliberate sound that the band cultivates during the song’s first minute will stick with listeners long after the track ceases to play. There is little more here rthan a brooding, dark set of vocals, guitars, and drums, but fans of drone or even of early Black Sabbath will find something that they can appreciate. After this introductory section, Guns gradually increases tempo, threatening to overthrow the order of the album.

Silvertruckin’ has some of the finest guitar work that we have heard from Undercover Rabbis. The narrative structurer of the trac k is reminiscent to mid-1980s Iron Maiden with all of the complicate post-grunge sound weaved in well. The usage of a rapidly-increasing momentum during this effort will appease fans of Mellon Collie-era Smashing Pumpkins. It’s frankly surprising at how much of a story that the Undercover Rabbis can tell when they have nothing more than their instruments.

Andromeda, the title track on this EP, immediately starts at a more emotive place – imagine Rites of Spring and At the Drive-In mixed in with just a hint of the Talking Heads for this one. The vocals do more than tell a story here – they are important in that they add further harmony to the guitar and drum dynamic that represent the cornerstone of the earliest part of the track.

Together Lethe and Be the Moth provide fans with a powerful one-two punch that both puts Andromeda on ice as well as lays out potential avenues for the Undercover Rabbis to take on follow ups to this release. Lethe has a haunting, nearly gothic sort of sound that is present through the track. A haunting, nearly moaning set of vocals is paralleled quite nicely through tremendous guitar work and splashy drums that are gradually given more time to shine. On the final outing, the Undercover Rabbis are able to spend nearly 8 minutes to make a blues meets sludge effort. The track will be eagerly lapped up by fans of Muse and Bloc Party, but the looking back to traditional progressive metal is a twist that makes all the difference. Fans will be on the edges of their seats from the opening of the track to the song’s final few notes. The wall of noise and distortion that concludes Be the Moth is the perfect conclusion for the release. Rather than ending things sedately, the sheer amount of fury and intensity that the band has when closing up shop showcases their never say die attitude. This is a tremendous album from beginning to end.

While each of the albums in the Undercover Rabbis corpus is important on its own, there’s no denying that the band has been able to evolve over the years. Furthermore, the production of Andromeda is done masterfully. This means that each constituent element of the band is able to shine on its own while contributing not only to the song at hand but to the entirety of the album.

NeuFutur readers, what do you think about the Undercover Rabbis?

Top Tracks: Follow the Wind, Be the Moth, Silvertruckin’