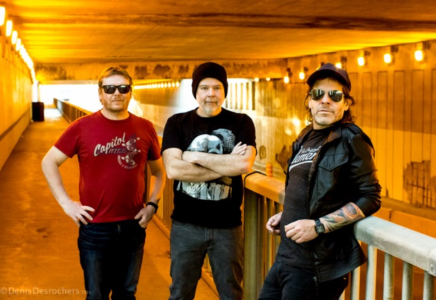 The Grand Brothers & Dee, both important presences on the modern pop scene growing in reputation and ambition with each new release, are teaming for a new project dubbed Patiently Awaiting the Meteorite. The first single “Electrified” from the collaboration’s forthcoming debut Canyon Diablo illustrates the production talents of the brothers while also illustrating the talents that have allowed Dee to land coveted spots like a Ford auto commercial during the most recent Super Bowl programming, but the scope of the new single reaches far beyond the confines of mere popularity. The project is clearly aiming to craft modern pop music with genuine substance and lasting value while still providing listeners with ample entertainment value for their money. “Electrified” personifies the best elements that each half of this creative partnership bring to the table without ever seeming hollow or pretentious. It’s a powerful first outing that reminds listeners what great pop music can accomplish.

Dee’s vocal is what likely will grab listener’s attention from the first and keep them coming back for more. He has an effortless presence inhabiting each second he’s active during the track and has a palpable level of charisma that, essentially, takes this already fine backing track and makes even more of it. He has an experienced singer’s canny knowledge, whether it be in pop music or any other genre, to find spaces inside songs where his voice can take full flight but, as well, shows a knack for knowing when to pull back and let the music take over. He doesn’t have a classically beautiful, technically superior voice, but what he lacks in those aforementioned qualities is more than made up for by his ability to bring himself into the song and the sheer brio powering his interpretation of the lyrical content makes for an invigorating listen. The lyrics are well written, while never tilling new ground per se, but that’s no matter. The message behind “Electrified” is timeless and Dee delivers those words with urgency and confidence in his ability to communicate with the audience.

The arrangement has every bit of the same bravado and powerhouse muscle pushing it along. Despite the obvious boisterous attitude of the music, nothing ever comes off crude, and the writing finesses a number of things that lesser performers and composers would have simply attempted to overwhelm listeners with. The foundation of the song is, naturally, the bass and drums and the bass, especially, throbs with a warm, fat sound that anchors everything down and reverberates in the chest. While the trio is clearly aiming for more than just a dance club number or something to be played over a good sound system, there’s no doubt this song is ideally suited for those uses and has the sort of physicality fans of that sort of material crave from their listening experience. Patiently Awaiting the Meteorite’s “Electrified” is a visceral listening experience that’s impossible not to like, even if you don’t typically favor this sort of music, and accompanied with a slick video that neatly dovetails into the song’s themes and musical pyrotechnics.