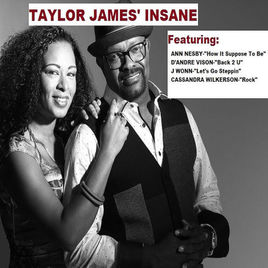 On Insane, Taylor James is able to craft a release that touches upon a wide swath of distinct musical genres. On Back 2 U, the album’s first track, James is able to blend together pop, soul, praise and funk music into a very dense and detailed effort. The vocals on the single do more than tell a narrative; they are able to come forth and bolster the aforementioned instrumentation. Say It’s Me links together 1980s R&B and smooth jazz with a hint of T-Pain. The track is able to touch on all of these genres while contributing to the overall entity that is Insane.

Good News is an effort that has all the coolness of the 1990s New Jack Swing style with sizzling horn and guitar sounds. James is able to switch things up as listeners get into the second half of the album. A favorite of ours is the Throw Back Mix of Rock, which has a sunny disposition and a hard snap sound that counters a thick, ropier bass line. The vocals laid down by Cassandra Wilkerson add a fullness to the composition. Rock is one of those efforts that will continue to provide to listeners; each element of the track can be appreciated as a constituent part of the composition or as its own unique entity.

How It’s Supposed To Be is the final effort on Insane, featuring the vocal abilities of Ann Nesby. The hard-hitting chorus ramps up the energy of this concluding effort. A robust blend of horns and synths unite to tattoo their melodies deep into the minds and hearts of listeners. Taylor James’ Insane is as strong in its concluding moments as it was when it first opened.