Tia McGraff – Stubborn in My Blood 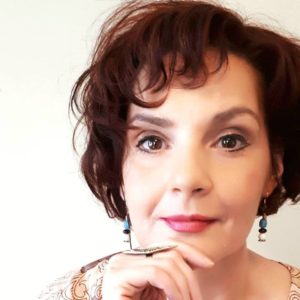 Canadian Tia McGraff, originally from the region surrounding Toronto, first met her musical partner and eventual husband Tommy Parham in Nashville and the couple have been recording and playing live together for many years. Parham is her chief collaborator, as well, on McGraff’s well received studio recordings and recent years have seen the tandem land their music on important radio shows like BBC 2’s Bob Harris Country and earn them dates at genre hotspots like Nashville’s Bluebird Café. McGraff’s new full length album Stubborn in My Blood features eleven songs with sure to be well received range in Americana music and keeping a decidedly low-fi air throughout the entire album. It’s an impressive union of conversational eloquence and poetic flourish defining each of the eleven songs and carried even higher by responsive and often melodic musical arrangements. McGraff and Parham hit a new peak with this release.

The first track “Pilot of Change” is a note perfect example of the aforementioned union. McGraff blends a talent for telling stories with her empathy with universal human experiences and the imagery behind the song’s title tops it all off with flair. McGraff’s vocal performance never takes a single shortcut here or elsewhere and her emotional commitment to the material raises it up several notches. “Hole in Your Heart” shifts the musical focus to something much more sedate, a largely tandem acoustic tune with just the right amount of electric guitar to further color the song. McGraff gives a vocal performance well in keeping with the song’s mood. “Own Your Sunshine” has a biting lyric edge, but the arrangement is pure Americana with a potentially underrated hypnotic quality. McGraff brings some blues influenced gravitas to bear on the song that makes it all the more compelling.

She hits another indisputable high point with the song “Strong”, a single from the album, and it’s easy to hear why McGraff and Parham chose to highlight this particular track. It’s an all hands on deck vocal from McGraff as she throws herself into the cut with the sort of abandon we don’t often hear from performers of any stripe these days – clearly this is a personal number for her and she longed to nail it. Her piano playing is woven through the arrangement in such a way it highlights the song’s specific chemistry while never seeming out of place with the rest of Stubborn in My Blood. The banjo spiked jangle of the title song sets a great musical mood for another winning McGraff vocal and the chorus is especially effective. This song, without ever seemingly trying too hard, easily rates among the best on the album and deserves its title track slot.

“Faraway Man” is a knowing, mature song about the challenges of loving someone who isn’t always comfortable letting others in. Despite the obvious melancholy in such a song, it’s notable how McGraff manages to play the lyrics with a bit of a shrug and a smile that makes hearing this track an even more interesting listening experience. “Forbidden” brings Stubborn in My Blood to the end of the line with a last nod to McGraff’s love of bluegrass, though it never dominates the sound like a more purist approach might. Tia McGraff uses Americana as a vehicle for her personal songwriting, but it’s clear she understands the forms demands while bringing something of herself both lyrically and musically to its traditions.