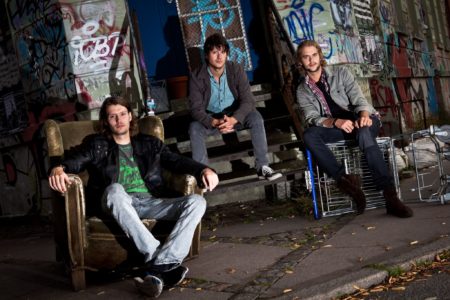 Out of the same fire and brimstone that once gave birth to music’s most spirited performers and composers comes Apogee, a rock album that deserves to be listened to by anyone who considers themselves to be a pop aficionado or just a fan of bold music in general. Vinyl Floor, the band behind Apogee, have been making noise in the European underground for a number of years now, but in the totality of their four album discography nothing has been quite as ambitious as this most recent undertaking, and that’s really saying something considering that their last couple of records have been symphonic in their construction and design. Instead of applying their garage-influenced rock format to a larger set of conceptual framework, Vinyl Floor is flipping the script of the musical direction of the last five years and exploring a more old school sound in the vein of proto punkers like The Stooges and even doom pioneers Pentagram. That said, don’t get the impression that Apogee is a retro exhibition piece in the same style as Wolfmother’s self-titled record; this is an album that is very unique to this period in history.

Songs like “Monday, Etc.” and “Acid & Wine” show off Vinyl Floor’s bluesy side while “Cool Swirl, Cool World” recalls the dirge of late 80’s punk rock as it stood prior to the advent of grunge and the Seattle sound just a few short years later. The contrast isn’t as inexplicable as it might sound on paper; if anything, the duality of Apogee’s eclectic tracklisting is pointedly progressive minded and elaborately stylish in the most 21st century way possible. If any other band were to try doing the same thing that Vinyl Floor did with this record, I don’t know if it would have worked quite as well, simply because Vinyl Floor has never tied themselves down to one style over another and has maintained a versatile approach to songcraft since day one (something that really can’t be said about any other band in their scene, or for that matter, their generation).

2018 needed Apogee so desperately that it would be easy to herald it with a lot of undue adulation if it weren’t so vividly produced with so much attention paid to the little details within its sound. For being their most low fidelity outing yet, this has got to be Vinyl Floor’s most focused work ever. Nothing is getting between the band and their instruments when I listen to any of these songs, and I don’t feel like they’re rushing to reach the climax or even trying to spread out the tension as to fill unwanted space. They’re utilizing everything excellently and efficiently, and even though this is their fourth album to date, you could have easily convinced me that this was a sophomore piece from a band that is still fresh out of the minor leagues and looking to make a big statement in the mainstream. This is a new chapter for Vinyl Floor, and you don’t have to be all that familiar with their music to know that they’re on the cusp of something amazing.

We reviewed Vinyl Floor’s last album Vaudeville back in 2014. We also sat down for an interview with the act.