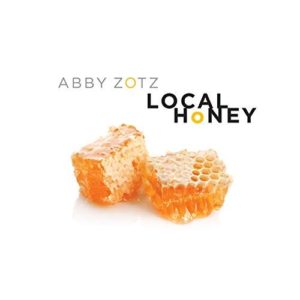 In an era when dirge and depression seem to dominate the pop charts to the point of leaving no room for anything other than music celebrating the bleakness of society, folkie singer/songwriter Abby Zotz offers up a piece of pure optimism in her new album Local Honey, and it couldn’t be coming at a more significant time. In all of the gloom and doom of modern music, a record as remarkably uplifting as Local Honey shines as bright as a shooting star and get us excited about the vibrancy of pop once more. Divided into eleven tracks that each contain a different element of Zotz’ sterling creative persona, this album is a must listen for anyone who has been feeling down and out about life and could use a little musical pick-me-up to get through the day. She might not be a household name yet, but if given the right platform I have a feeling that audiences from Canada and beyond are going to have a tough time resisting the charming harmonies and relatable lyrics of this up and coming pop sensation.

In the music video for Local Honey’s “Good Bones,” we follow Abby Zotz as she opens up her home for a family gathering that slowly turns into a freeform jam session. Zotz has clearly been cultivating her musical abilities since childhood, and in the video we get an idea of what most of her youth must have looked like; a household constantly engaged in laughter and joy centering on music and all of the vitality that it generates. The energy translates into slower songs in Local Honey (especially “See Your Face”) and makes for a very comfortable, relaxed vibe that lasts throughout the entire record. I’ve said in the past that you can really judge an artist more from their longhand work (i.e. albums) than you can singles, and if there’s one thing that we learn from this release above all else it’s that Abby Zotz doesn’t record filler – all of her songs could stand on their own as individually stylized masterpieces.

Abby Zotz could probably play almost anyplace and still have the haunting effect on her audience that she does in the studio, but I think a dimly lit nightclub might magnify her charismatic nature more than any other venue. Her music has a sensuous, muted way about it that can inspire a sense of sedation both mentally and physically. We become hypnotized by her ethereal voice at the start of this record, and by the time we’re reaching its conclusion we’re captivated by even the slightest pluck of her guitar. I don’t know where she came from or how she got here, but Abby Zotz has found her rightful place in this world, and it’s making music. I’m intrigued by the direction of Local Honey and am quite positive that this is only the first of many reviews that I’ll be writing about her work as the years go by, and I wouldn’t be surprised if in the next half decade she finds herself going from breakout indie artist to chart-topping pop star.