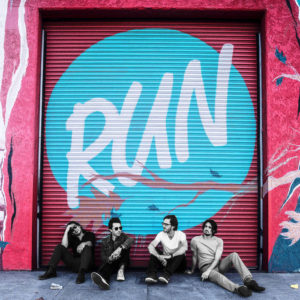 California indie rockers Dangermaker unleash their most musically sophisticated album to date in Run, a twelve track smorgasbord of textured sonic bliss that will change the way you think about modern pop. Dangermaker have been quietly building up a cult following on the west coast over the last few years, and their latest record sees their sound evolving into a full color kaleidoscope of rich melodies that are unparalleled in 2018. I had the chance to listen to Run ahead of its October 5th domestic release date and was absolutely enamored with every stitch of brilliant audio it contained. Even if you’re not familiar with Dangermaker, this record will make you an instant fan of their unique blend of spacey psychedelic pop and primal post-punk nimbleness.

Run takes the sound that Dangermaker employed in their Light the Dark EP to another level of cerebral complexity that few other bands would be intrepid enough to experiment with. The opening track “In a Dream” comes to life like a symphony of 80’s style neon synthesizers colliding with a ferocious garage band, while the David Bowie-style “Face the Facts” starts off straightforwardly before blossoming into a searing noise pop powerhouse. No two songs on Run feature the same formula or structure, and each provides an intriguing look into the different dimensions of Dangermaker as a unit. The band is surprisingly vulnerable in a handful of the tracks, and overall there’s no denying that this is by far their most polished and streamlined release yet.

One of my favorite songs in Run is “Ashes to Ashes,” a sleekly arranged minor key club tune that is as introspective as it is fun and danceable. One of Dangermaker’s best qualities as a band is their ability to contrast suave beats with contemplative, self-aware lyrics, and this track is an excellent example of why so many critics are calling them the future of indie rock. It fits in well with the post-punk balladry of yesteryear just as well as it does contemporary college radio fodder, which isn’t as common as you might think. Dangermaker are experts at balancing their influences with their aspirations, and young bands struggling to find their identity could benefit a lot from taking a similar approach.

They may have been circling the boundary line between underground and mainstream rock over the last few years, but I believe Run not only brings Dangermaker into the international limelight, it also maintains the DIY ethics that have made the band’s sound so authentic and enjoyable for hardcore music enthusiasts. I get to see a lot of bands grow out of their scenes and reach superstardom in this business, but I don’t recall the last time I saw a band as passionate about retaining their ethos as Dangermaker is – and succeeding nonetheless. They’re fearless, original and have just cut one of the best albums that I’ve heard all year, and what comes next for this San Francisco crew will be entirely up to them as they enter the next chapter of their fascinating story.