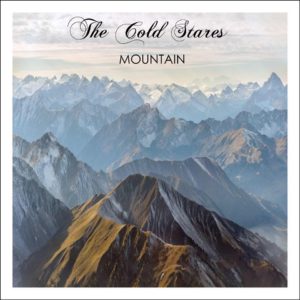 If we were to define The Cold Stares’ new album Mountain purely by its lush lyrical content, to describe it as anything other than a cryptic dreamscape that presses all of the psych-tinged bluesy cues hinted at in Head Bent into full blown experimentalism simply wouldn’t be accurate. Mountain is a gorgeous realization of singer and guitarist Chris Tapp and drummer Brian Mullins’ original audiological blueprint in high definition sound, still fitted with a razor sharp rebelliousness and accentuated by a studded groove that has only gotten more aggressive in the last year. Mountain has some gigantic riffs – “Wade In The Darkness,” “The Great Unknown” and the chorus on “Stickemup” just to name a few – but it also offers a litany of acoustically-styled slow songs.

Tracks like “The River” cling to the ethers around us like a ghost; the vocals are grainy and isolated from the guitar, sounding like a radio transmission from far away, while the six-string itself is front and center, alone in the spotlight to spin its macabre tale one elegantly yearning note at a time. As reflective as it is threatening and antagonistic when it needs to be, Mountain is a creative quantum leap for this pair of indie rock darlings who successfully transition from underground obscurity into the primetime with this new treasure chest of soulful blues anthems.

While some of Mountain’s more riff-centric material toes the border between southern rock and stoner metal, even its most unhinged moments like “Gone Not Dead” are curtailed by the smooth drumming of Brian Mullins. Tapp steals the lion’s share of the attention on this record, but Mullins is responsible for contributing its most essential element; the framework of its somewhat shapeless melodies. “Sleeping With Lions,” the album’s star single, would be totally out of control were it not for its insanely focused beat, which balances out the fireworks Tapp is dispensing on guitar with a more bucolic rhythm. I think it’s what makes the song work – without this rhythm, the swing would be absent and the blues would fall completely flat, which would ruin the bitter tension we come in contact with as we approach the chorus.

A lot of the songs we find here take a minute to warm up – chiefly “Friend of Mine,” “Cold Black Water,” “Killing Machine” and the eponymous “Mountain” – but they also tend to be the most elaborately expressive and emotionally intuitive that the record has to offer. The sexy howl that Tapp dispenses in the title track is actually much more accessible than the haunting minor key glow of the acoustic “Under His Command” or the electric country ballad “Child of God” is, but it takes about a full sixty seconds for the song to come into its own and really emit a providential aura. It took me a little longer than that to pick up on this album’s religious foundation, and once I did it only made the enigmatic lyrical content all the more avant-garde and metaphorical by nature (in reference, “Two Keys and a Good Book” is the best example I can point to). Mountain is chock full of sophisticated poetry countered with full-on blues rock carnage, and for listeners who desire a sound that is as intelligent as it is catchy, this is a safe bet for sonic satisfaction this autumn.