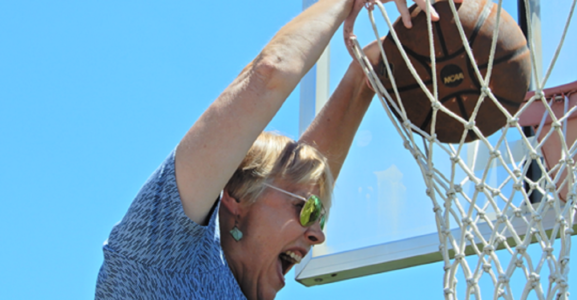 Dawg Gone Davis’ 2018 emergence as one of the funnier hip hop influenced performers working today is quite a story. The technology professional made her first splash on the scene with the improbably titled “Middle Aged Woman – Hip Hop Style”, a comical and musically rewarding single facing the idea of a middle aged woman from Kansas City tackling a style you’d never expect. The song is included on her EP release, In the Dawg Pound, and still retains all the comic value it possessed when it first hit the market earlier this year. Davis’ music, unlike many other acts with a humorous bent, produces songs capable of holding up under repeated listens – she’s writing songs for herself, first and foremost, but a vivid facet of her singular talent is how she never neglects to write songs listeners can return to again and again.

Keyboards and synths are important to her musical sound and the aforementioned song is no exception, but Davis thankfully never restricts herself. The songs “Butt on Fiya” and “Forever Music” mix those electronic sounds with robust horns and even flirt with other musical styles like jazz without ever veering too far away from Davis’ forte. Despite the pre-programmed nature of her backing, Davis always sounds like she’s working with a live band behind her as the arrangements consistently exude warmth. “Butt on Fiya” is especially enjoyable thanks to its lightly self deprecating slant and the smirking emphasis Davis puts into her vocal – it adds another layer to a song that has a serious subtext as it deals with Davis’ battle with cancer.

“Forever Music” has some darkly comic observations, nothing too heavy, but you can likewise hear a lyricist and performer who truly has a lot invested in music thanks to her love for communicating with listeners. All comedy aside, In the Dawg Pound is a very giving release and Davis clearly wants to share her passion for writing, recording, and performer with the world at large.

“Anthem Pandemonium” is more spirited than the earlier songs discussed and keeps listeners involved from the first. She even swears a little in the song, emphasizing how its attitude differs from the other three songs, but it’s never in poor taste and feels firmly in keeping with the track. It begins with a slow percussion simmer before the tempo spikes and piano melodies unwind deep in the mix. The same spirited vocal she brings to bear on the earlier tracks comes through here with a distinctly different flavor – she dramatizes the lyrics a bit more without ever sounding over-wrought or too stagey. It’s a satisfying end to the EP and underlines the strengths displayed with the preceding three songs.

In the Dawg Pound gathers Davis’ singles into quite an entertaining package and it conclusively proves that, yes, Davis has plenty of humor to capture listener’s attention, but there’s genuine musical substance powering this release as well. Rebecca “DawgGone” Davis is unlike anyone else writing or recording hip hop today and her music has real broad-based appeal.

The music of Dawg Gone Davis has been heard all over the world due to the radio plugging services offered by Musik Radio Promotions. Learn more – HTTPS://musikandfilm.com