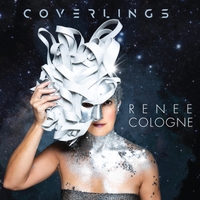 Renee Cologne’s – Coverlings, is an album you’ll be talking about for a while if you get wind of the majesty to be heard on this release full of precious gems that she put her stamp on with effortless magic. Her voice isn’t exactly unknown but as an indie artist she’s making her own footprints, and she has written or performed for stage, dance and film, including M&M’s and other well-known commercials. With three independent releases and much else behind her, this fourth album is a milestone that will go the distance. The choice of music to cover was nothing short of a masterstroke and Cologne’s input is over the top.

“Jersey Girl” starts off with one of, if not the most accessible cuts on the disc, but that’s only because she makes it that way from an otherwise well-known but not extremely consumed Tom Waits piece. The track itself isn’t what you’d call a pop tune, but now you can add that tag because Cologne managed to make it her own. And it doesn’t end here, as most of the songs reach that goal, assuming it was one. And there are also a few tracks without that about them, but for the most part it’s her using them more as vehicles for her own magical voice.

“Landslide” has been done a lot, I know, but don’t gloss over it because if I were to compare it with the Fleetwood Mac original, I would at least call it as good, if not maybe even better if it lasts with due time. But it’s also worth noticing “I Believe” by Stevie Wonder for the same reason because it’s probably the most reinvented song on the album, and one of the best too. She just makes so many of these songs her own without making you forget where they came from.

“Let It be” is done with such fabulous texture and modernization that you just have to give Cologne all the credit in the world for hypnotically drawing you into another cover of a Beatles song without giving you the static norm version in the process. After hearing that I realized I was listening to one of the most mesmerizing voices I’ve heard in many years. It leaves you battered and begging for more of that beautiful whisper she weaves, it’s not a sound you hear every day. This is a premiere pop vocalist and songwriter.

“Get Here” and “Up The Junction” keep the album going with more variety and the usual share of Cologne’s re-arranged magic, which brings just as much to the release as anything else on offer. Her voice seems to cut through just about anything it touches, so a second volume of Coverings wouldn’t be a case of overkill for me because she does the business so well it’s a no-brainer to want more of this type of thing from someone who makes it sound like a soothing walk in the park. And you even get “Wichita Lineman,” the Glen Campbell classic which takes the overall prize with Cologne’s voice carrying for miles.