Tom Petty And The Heartbreakers – The Best of Everything (CD) 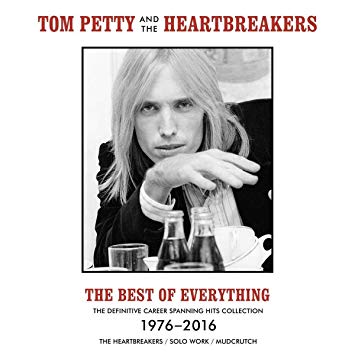 It would be easy to write off this latest Tom Petty Best Of as just another cynical cash grab from record labels; that is if this 38-song set wasn’t such a brilliantly-curated, meticulous collection of Petty’s best work grabbed from his solo catalogue, his long tenure with The Heartbreakers and his pre (and sometimes post) Heartbreakers gig with the band Mudcrutch.

Spread out across two CDs, though the songs are not in chronological order, the sequencing is solid, starting off with one of his biggest solo hits, “Free Fallin’” before moving into “Mary Jane’s last Dance,” which was ironically released on the band’s last Greatest Hits album and then moving into another mix of solo and Heartbreakers songs.  A beautiful companion to last year’s essential Petty boxset, An American Treasure, The Best of Everything spans his four decades in music. And while it certainly houses a slew (i.e. every) hit he ever had outside of The Traveling Wilburys, it also boasts some of his lesser well known, but equally powerful songs. Especially warranted here are two unreleased tracks, an alternate version of “The Best of Everything” and a new track, “For Real”.

This set manages to be everything to everyone; a must-have for even the most casual of Tom Petty fans and a perfect launching point for those less familiar with his music (if such a person still exists).