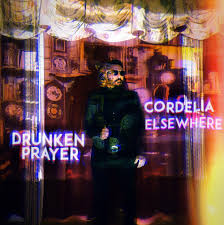 Mainstream Country music has gotten some bad press over the past few years because… well, it’s bad, sometimes dreadful. For the most part, it relies on clichés and unimaginative recycled themes and lyrics that appeal to the broadest, most unimaginative audiences out there. But then there’s those musicians that live in the shadows of Mainstream Country music – the authentic Americana bands, the Bluegrass groups that don’t give a shit about radio airplay and the Outlaw Country acolytes who worship at the altar of Willie, Waylon and Bobby Bare, but wouldn’t know a Luke Bryan or Kenny Chesney from either member of Wham!

Drunken Prayer (probably best known as Freakwater’s Morgan Greer) is one of those musicians thriving in those shadows, turning out one great record after another with little attention from Mainstream Country Radio or the producers of Ellen. And his fifth offering, Cordelia Elsewhere, is his best to date.

Across 10 tracks, from the almost jubilant ode to bad decisions and bad luck, “Four Leaf Clover” (easily the best song yet about kids losing their parents to a bear attack), the opening, rock-infused “Into the Water” to the sanguine, surprisingly deep “Time to Go,” Drunken Prayer offers one of the best arguments yet for Country fans to turn off the radio and head into the shadows for the good stuff.