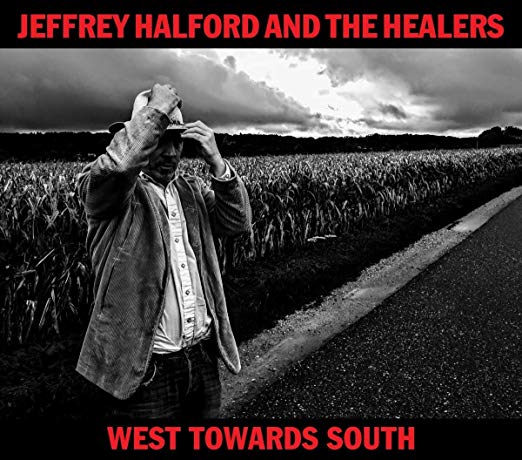 Americana gets a much-needed makeover in the all-new effort from Jeffrey Halford & the Healers, West Towards South. Recorded in San Francisco and Mill Valley, California, West Towards South features a bittersweet Californian catharsis that blankets the Heartland harmonies and balladic blues elegies and lends a supple surrealism to tracks like “The Ballad of Ambrose and Cyrus,” “A Town Called Slow,” “Sea of Cortez” and “Three-Quarter Moon.” Textures within the string melodies paint us a picture of the American landscape as seen through the eyes of two brothers headed out west in search of adventure, while sporadic stampedes of powerful percussion setting up bucolic beats keep us on the edge of our seats, waiting to find out what our protagonists’ westward road will throw in their direction next.

The title track, “Sea of Cortez,” “Willa Jean” and “Deeper than Hell” are some of the more complex examples of Jeffrey Halford & the Healers’ transcendent songwriting style, while “Gallows,” “Dead Man’s Hand” and “A Town Called Slow” display a simplistic lyricism that made Broken Chord a critically acclaimed smash. From what I gather, besides the story that the songs tell us over the course of the album, West Towards South was created with the idea of bringing all of the fragmented concepts, experimental ideas and uncut melodies of past records into a singular tracklist that would give us the full package of what this band is capable of producing when they’re firing on all cylinders in the studio together. Even if that wasn’t their intention, the design of this album inarguably defines its identity more than anything else does.

In “Gallows,” the tension in the music swells to an almost unbearable level, and we don’t return to a relaxed place until we get into the emotional end track “The Ballad of Ambrose and Cyrus,” which in more ways than one brings us full circle to where we first started out in West Towards South. By using the mood in the instrumentation to contextualize every verse that we hear in this LP, Jeffrey Halford & the Healers not only show off the virtuosity of their lyricism, but moreover, the dexterity of their compositional skillset. Not many bands in country, rock, folk or any genre put in the kind of time and effort that it takes to make an album as soul-stirring as this one is, and that’s exactly why it’s such a refreshing record to come across.

If you dig real deal roots rock and acoustic Americana of the most discriminating variety, you’d be hard-pressed to find a more satisfying listen this season than you will in West Towards South. Jeffrey Halford & the Healers have made it so that whenever they cut a new album, it automatically builds up the hopes of both their fans as well as critics like myself, and I can vouch that – at least in this situation – their latest material lives up to all of the buzz that it’s been getting even before seeing official release in the United States and abroad. 2019 is going to be another big year for these guys, and really, for anyone who loves honest Americana.