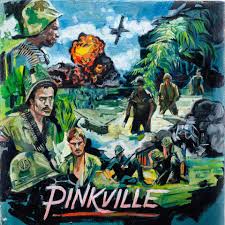 If Tom Waits had been born and raised on boudin and Tabasco sauce somewhere in rural Louisiana, he’d sound a hell of a lot like Rod Melancon.

On Pinkville, Melancon’s fourth and most personal LP yet, the Cajun Dylan delivers a powerfully searing collection of Southern Gothic, swamp rock with tinges of Americana.

The album starts out slow with the two gritty opening songs, the title track and “Goin’ Out West,” but Melancon quickly finds his footing with the satisfyingly raunchy guitar rocker “Westgate.” The album rarely lets up from that point on, from the haunting CCR-worthy organ on “Rehabilitation” and the near hymn-like reverence of a song like “Corpus Christi Carwash,” an obvious classic from the first time you hear it. The seemingly self-confessional “Manic Depression” is just as impressive.

His rock and roll heroes are front and center, given his strong cover of Springsteen’s “57 Channels” (breathing excitement into one of Bruce’s most mediocre songs) and his surprisingly touching ode to the late Tom Petty, on “The Heartbreakers,” but elsewhere you get snatches of everyone from Leon Russell to John Fogerty. Lyrically and musically, Pinkville sounds like the soundtrack to a Francis Ford Coppolla movie that never got made.

After you get done with John’s review, take a look at our previous coverage of Rod’s “Lights of Carencro” and “Perry“.