Coffins – Beyond The Circular Demise 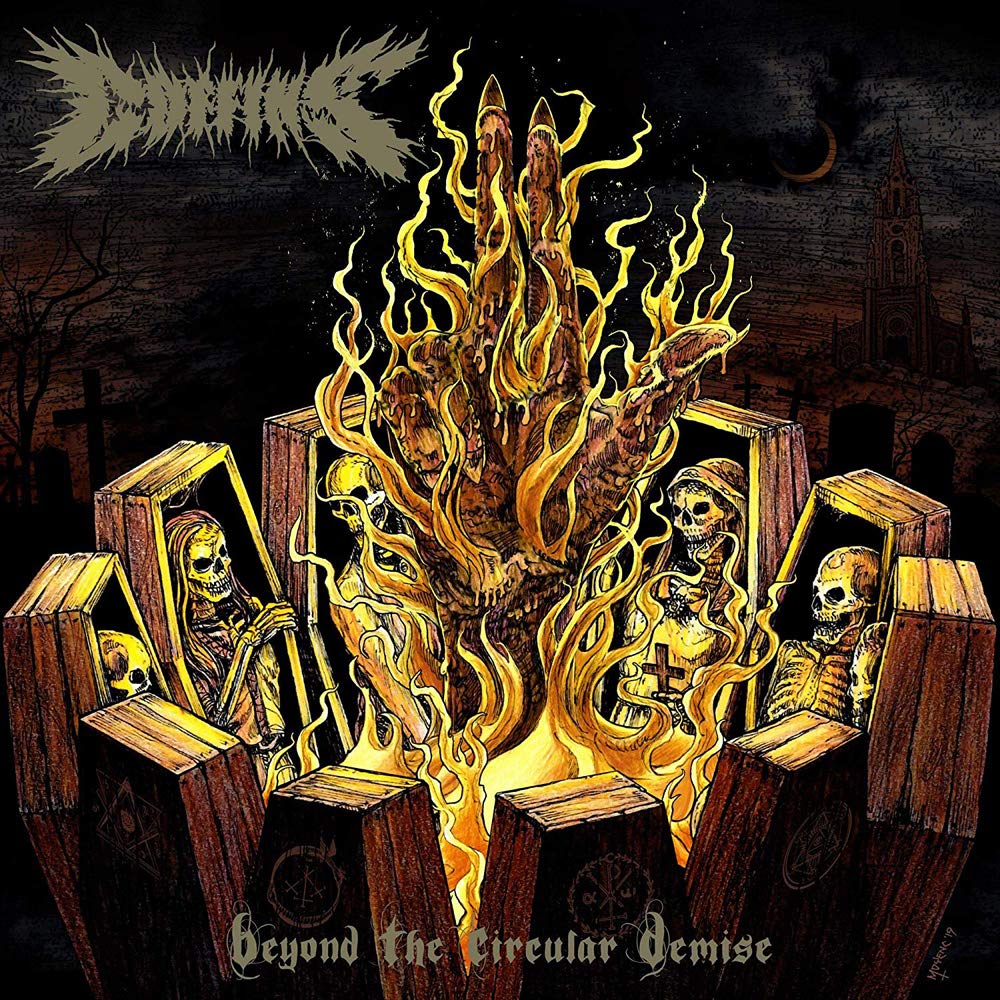 When you think of Japan, you think of sushi, manga, anime, bullet trains, and the samurai; what you do not think of is solid death metal. And Coffins are a prime example of why we cannot spend any more time sleeping on Japanese death metal. The death/doomsters are back with their fifth release “Beyond The Circular Demise” an infernal release with grit and teeth.

It is a crime that after four full-length releases, numerous splits and EPs and fourteen years on the scene, the bruisers in Coffins are slowly grinding their way into worldwide stardom. But their approach on Beyond The Circular Demise clearly shows us that they are masters of their craft. There is no mucking about with longwinded intros and ambience that plague many modern death metal releases. Coffins hits you right where it hurts on opener “Terminate by own Prophecy”. Their signature sound mirrors the grimy, unpolished, and almost primal nature that has been popularized in recent times by acts like Tomb Mold, Convulsing, and Pyrrhon. The drums are lumbering, the bass is dripping, and the guitars are thick, gritty, hefty, and illicit a sincerity that the synthetic production of modern records belie.

The riffs on Beyond The Circular Demise are as nostalgic of OSDM but are not without tricks and flourishes buried deep within its chasms. There are flecks of crust-punk inspired chugs and oozing sludgy doom arrangements like those found on Impuritious Minds. These sections are where Coffins do their best work. The vibe is instantly cavernous and monstrous, pummeling, and filled with inevitable dread. Chuggy sections like main riff section of Insane form a perfect backdrop for vocalist (and guitarist) Uchino to summon infernal growls from the bowels of hell itself. A surprising quirk is the occasional use of vocoders to blend the vocal lines into an electronic static sample which is odd and unsettling, and becomes a quick highlight. Album closer Gateways to Dystopia takes a small step towards modern doom with its main riff arrangement and quicker pace set by the thundering double kickdrums and is one of the strongest ways to end a record.

As a Japanese artist, it is understandable that English is not their primary language of expression, so props must be given to the band for trudging on with English titles and lyrics, however the grammatical errors in the song titles feel awkward and take away from the total effect of the record itself. In addition ,being a spoiled millennial I still struggle with the crusty production values, and I firmly believe that Coffins would be better served by modern sonics, but the sound does match the imagery and adds weight to the savage motif so my quibbles are minor. The drums are unquantized, the hits are not always square but are hard, and human.

At the end of the day, Beyond The Circular Demise is a beast of a record. It makes no excuses for what it is: a chunky slab of slow moving, evil, dreaded animal which should not be trifled with.