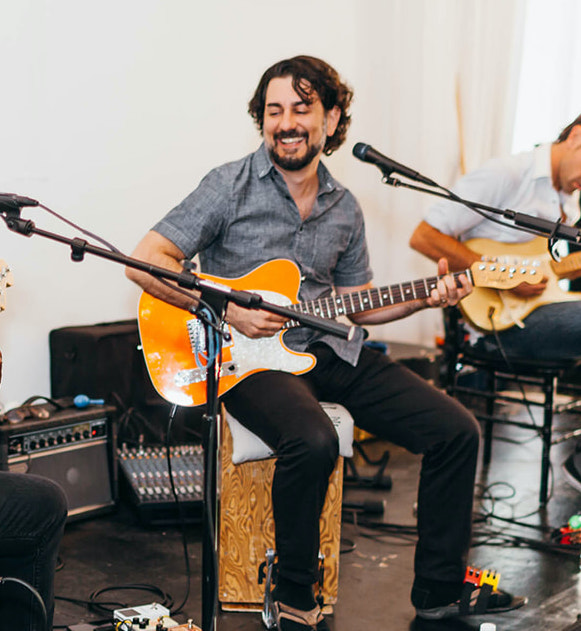 Eclectic elements are practically everywhere you look and listen in modern pop music, and Mike Donello & the New Essentials are a perfect example. Donello and his band blend together influences from R&B, indie rock and classic pop in their eponymous debut EP, and though their first record only clocks in at about 19 minutes in total length, it doesn’t come off as limiting nor a scattered effort from a group trying to figure out a new formula. In “Fun and Games,” “A Better Day” and “Setting Things in Motion,” we meet a band that seems more than confident in who they are instrumentally, while in “Roll” and “Southside,” Donello gets us acclimated to a vocal style that is refreshing to hear from a current pop singer to say the least.

Let’s start with the powerful soul ballad “A Better Day.” In this track, Mike Donello’s vocal isn’t as commanding as the strutting guitar to his left is, but that doesn’t mean the two components don’t find an equilibrium in the harmony they create together. The bassline is a beast, and yet it never intrudes upon the presence of the drums – because of the layered master mix, everything is neatly presented to us as a single tour de force without minimizing the impact of any one specific part in the music. It’s calculated and concise producing if I’ve ever heard it, and while this isn’t the only reason Mike Donello & the New Essentials works, it’s a big check in the positive column without a doubt.

“Southside” and “Setting Things in Motion” are more exotically constructed than “Fun and Games” and the poppy “Setting Things in Motion” are, but overall, the fluidity of the content on this disc is something the New Essentials’ peers could really stand to learn a lot from. The liberal aesthetic in the flow of the guitars in “Setting Things in Motion” and “A Better Day” would, on paper, conflict with the plodding bassline-drive of “Southside,” but thanks to the even-handed mixing of the material, there’s rarely a moment where it doesn’t feel as though one song is slipping into the next seamlessly, as they would in an unplanned concert medley. I can’t wait to hear a full-length from these guys; they’ve obviously got the skills, now it’s just a matter of getting them back into the studio.

Melody lovers of all stripes, shapes and sizes cannot afford to miss what Mike Donello & the New Essentials produced in their first studio record, and while it’s geared towards an audience that prefers amalgamative harmonies to minimalist pop simplicity, it has something for almost any listener who enjoys a slick beat and a soft but cunning lead vocal. Indie rock has taken a lot of different forms in the last thirty years, but as long as bands like this one continue to experiment with the limitations of genres, styles and musical creativity in general, we can rest assured that the 2020s will be even more interesting than the preceding decade was.