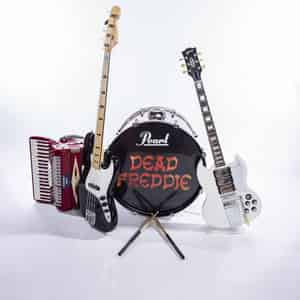 CLICHÉ is the first effort off of Dead Freddie’s new self-titled LP, and it immediately calls back to acts like The Stranglers and The Adverts. Melodic pop-punk with driving beats and a robust bass line sound absolutely timeless here, while the passion and charisma of the lead vox will immediately draw fans in to the rest of the disc. When I’m Bound begins with some Cars-esque keys and a hint of ska-infused horns. The rapid tempo will keep fans on the edges of their seats, while the chorus tells a story out of The Misfits or Aquabats’s playbook.

Going To The Dance is an interesting composition on this album. It’s the bands first foray into a longer-form single on the release. The bit of extra time that Dead Freddie give themselves here yields considerable dividend. There’s a bit more plumbing of pub rock and AOR styles with just a hint of the earliest goth acts (e.g. Siouxsie and the Banshees, 45 Grave) that can be picked up here.

Pocket Judy Crash Course has a bit of a pirate-punk meets hardcore-punk style. Imagine a jam-up of the Nekromantix and Gogol Bordello alongside some of the intense bass work of Jay Bentley. She Won’t Play House is one of the high-water marks during the second third of the album. Mix up a bit of rockabilly with Fear and you’ve got an idea of where Dead Freddie is hitting on SWPH.

Cartoon Woman keeps the same bouncy sound of Pocket Judy Crash Course, while Princess Pilot has a delightful instrumental/vocal/clap dynamic. Save Me From Myself winds things down with a wistful, longing sound. Little more is needed to conclude this release than a guitar and touching vocals.

Top Tracks: When I’m Bound, Going To The Dance, Save Me From Myself