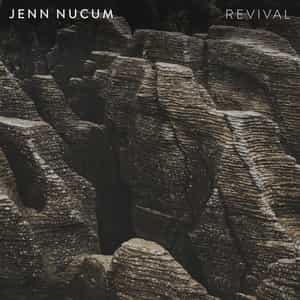 Jenn Nucum’s Revival album begins with Better Optimist, a single that sets the stage for a theme of hope and lessons learned. Nucum’s approach takes nods from mid-1990s alternative and the singer-songwriter style, linking together a guitar of guitars with a close-knit drum line. Cutting out well before the 2:30 mark, Better Optimist keeps the momentum robust as fans move into All The Same. Nucum’s All The Same is a careful and introspective track. The guitar and vocal dynamic create something endearing. Little more is needed to ensure that listeners remain on the edges of their seats. Taken together, these first two track showcase a considerable variation in the sort of styles in which Jenn feels mos comfortable.

Honest is a high-water mark for Revival in that Nucum is able to reach some vocal highs. Through the inclusion of Kritty Uranowski to the mix, Honest ends up being one of those efforts that sticks with listeners long after the single ceases. Out For Blood begins with an insistent guitar strum and an overall spirit that touches upon the spirit of a Counting Crows or Jill Sobule.

Nucum’s take on Julien Baker’s Something works masterfully for the later registers of Revival. An atmospheric, airy sound dominates in the song’s white space, given a bit of direction through Nucum’s vocal nuances. The titular track to Nucum’s Revival concludes the album. Where a great many performers conclude their releases with what may be weaker than what opened the release, Nucum’s conclusion will have listeners hanging upon on every word. The final minute of Revival has Jenn reach previously unheard heights. Where this is another track that is little more than a guitar, keys, and Jenn’s vocals, the constituent element ends up being so much greater than the collection of contributors may seem.

Top Tracks: All The Same, Out For Blood