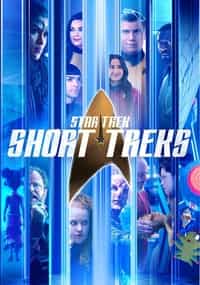 As someone that grew up with Star Trek DS9 and Voyager in my childhood, I was a bit disappointed in the lack of Star Trek on the small screen from about the end of Enterprise until Star Trek: Discovery kicked off. Imagine my surprise at the deluge of shows and materials that would be released by CBS in the last few years. This DVD set collects the entirety of the Short Treks episodes for ease of viewing (US viewers have needed to puurchase the CBS All Access service to view these previously).

The video quality is crisp and clean with a 16:9 aspect ratio. The overall theme present in the Short Treks varies between episodes, with H. Jon Benjamin taking a hilarious foray into the Tribble menace and Rebecca Romijn breaking out some serious pipes in Q&A. While each of the Short Treks can be enjoyed on their own, it’s surprising how much the episodes contribute to the overall Star Trek canon. Whether it be insights into Star Trek: Discovery’s cast (Tilly in “Runaway” or Saru in “The Brightest Star”) or even a character spanning three shows (Christopher Pike), the Short Treks should hold as much weight as main-line episodes from the shows.

To further increase the value of the Short Treks collection, CBS DVD has bundled a number of bonus features in this release. Whether it be audio commentaries (for Runaway and Ask Not) or the process in crafting the distinct animated look of Ephraim & Dot and The Girl Who Made The Stars, Trekkies will find something new to sink their teeth into. One of the strongest inclusions in these featurettes is Rainn Wilson touching upon the directing process for his Harold Mudd-specific episode, “The Escape Artist”.