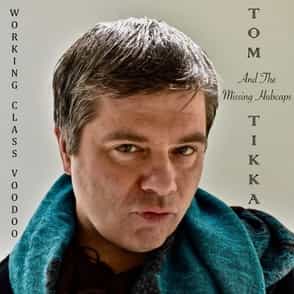 Tom Tikka and the Missing Hubcaps come out of their corner swinging on the three song EP Working Class Voodoo with the title song “Working Class Voodoo”. The rock leanings of this track are pushed in just the right way; it isn’t Tikka’s style to bulldoze listeners with a guitar blitzkrieg. Nuance is the word of the day here. Tikka and his band achieve a specific stylistic approach early on in this song and it continues for its entirety. The guitars have just enough of a jagged edge to give them that hint of swagger and danger while the harmony vocals Tikka employs during the track balances out the track in an even-handed manner. It’s a great way to open the EP and is certain to be at least one track on the release that sticks with listeners.

That isn’t to say the remainder of the EP release isn’t worth your time. The second track on Working Class Voodoo, “Daytime Suffering”, gathers guitars en masse in a way the title track doesn’t dare.   Tikka builds the instrumental intensity in tandem with the rhythm section, especially the drums, and key in close to Tikka’s vocals. As important as the lyrics are to the title song, they seem even more crucial to the song’s success in the second track, though there are singing touches affecting this performance, namely harmony vocals not nearly as effective here as they are in the title cut. They dilute the lyrics somewhat – a shame considering this is a more interesting lyric than the title song provides. Tikka unleashes an incendiary guitar break close to the song’s conclusion that puts an emphatic exclamation point on the track.

“What Is Love?” is an appropriate ending to the EP. A lot of listeners might have expected, given the tempos of the first two songs, for Tikka and his bandmates to take things in a breezier direction. They do not. It is impressive to hear how much color and texture Tikka and his fellow musicians can invoke within a short duration. Guitar is a fixture, once again, but Tikka continues using the instrument with a sense of proportion rather than slathering on a slew of needless riffs and lead guitar playing.

These European rockers conjure a distinctive sound echoing the past but sporting its own identity within a tradition. Tikka’s songs are models for how you marry the rugged and melodic together in convincing fashion with one element never ceding ground to the other. The production gives these tracks near-palpable physicality; this is music that engages you rather allow you to choose interaction. Tikka and the Missing Hubcaps are far from some post modern punk rock act, but they will not be denied and compel you to listen.

Working Class Voodoo will not be Tom Tikka’s last word as a solo performer. It seems ovious he has proven to himself with this release that there is enormous potential for growth writing and performing new music under this moniker. It may only be three songs, but this EP release packs quite a punch and should translate well over to live performances.