Brendan Staunton’s Last of the Light 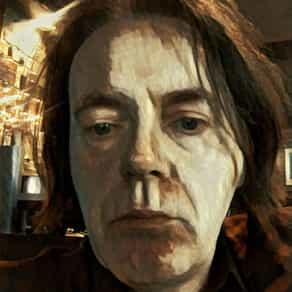 Brendan Staunton began his musical journey in the early 1990’s singing with the Celtic influenced rock band Dubh Chapter. The band produced an album produced by Steve Hillage entitled Silence, Cunning & Exile but broke up soon after. Staunton briefly sang with the ambient dance band Ultramarine appearing on their track “Weird Gear” before deciding to leave the music industry behind. A quarter century passed before Staunton re-established contact with his past life and worked with Cross and Quinn on their album release Red Sky Blue and has now released his first collection in thirty years. Last of the Light has nine tracks and a strong singer-songwriter vibe from beginning to end. It avoids any sort of pretension and the direct conversational technique he adopts for each of the nine cuts. The songs aren’t lacking imagery, however, and Staunton has a clear poetic touch that distinguishes many of the numbers.

“We Can’t Talk About It” drives straight into the heart of a failing relationship. It lays down the acoustic foundations defining much of the songwriting on Last of the Light. No one will say Staunton relies too much on any one songwriting formula, though the album would gain much if it included even a single up-tempo performance. The relaxed musical gait of “We Can’t Talk About It” enhances the vulnerable language of its lyrics and Staunton envelops them with such feeling you can’t help but be moved. “Mean to You” is a strong follow-up to the album opener and continues the musical mood of “We Can’t Talk About It”. There are no accusatory performances present on this album; the overall tone is downcast though it never proves to be a difficult listen.

Songs such as “River” make it clear why. Fatalism is one of the many emotions you hear in this track and Staunton couples the words with an eloquent and delicately rendered arrangement ranking among the album’s best. The songwriting hits an emotional bottom of sorts of the agonized lyrical landscapes of “Stop Believing” and “Smiled”, though there’s much more outright affection in the latter cut. Pain weighs down both songs but never enough to sink listener’s possible enjoyment of each number. He achieves an impressive balance between gut-wrenching despair, lush emotive vocals, and arrangements with genuine musical and melodic value.

“Underwater” does strike such a downbeat note, but it is clear we’re still in familiar songwriting territory – a speaker’s best intentions gone astray in a deepening emotional quagmire. The chorus is one of the album’s strongest. “A Girl” closes Last of the Light on a different note than the earlier songs. It has a strong modern pedigree thanks to his use of synthesizers and its impressive hearing how much his vocals thrive in this musical environment. This sort of understated daring further separates Staunton’s work from peers and contemporaries who opt instead for adhering to hidebound formulas. It’s an excellent way for Brendan Staunton’s Last of the Light and bodes well for any future recordings. His return to active recording and songwriting couldn’t have ended up any better.