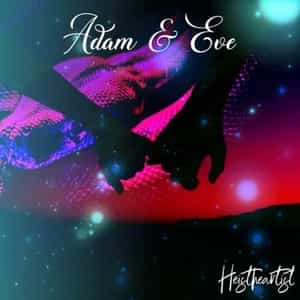 With a slinky groove behind its melodic strut, there’s never any question in the opening bars of “Boom – Love Version” as to whether or not we’re getting the best performance out of HeIsTheArtist possible – around every turn in his new EP Adam & Eve, this slow jam crooner is giving every part of himself to the audience. Sensuousness is delivered through an unbranded lens in Adam & Eve, and while the overall theme tends to lean on the R&B genre more than it does anything else, there are shades of pop, jazz and even a touch of experimentalism in the mix. HeIsTheArtist came to play this September, and that’s quite evident in even the most casual of listening sessions spent with his latest record.

The vocal tends to be the main focus throughout this EP, with its role extending well beyond the reciting of verses in covers of “High Fashion,” “Lovin’ You” and the medley “Sometimes / I Want You Around,” all three of which show off a different layer of this player’s personality. There’s a lot to learn about an artist by hearing what they can do with a well-established piece of music, and I think it was especially wise of HeIsTheArtist to balance the three mixes of “Boom” with some content that touches on multiple elements within his skillset. He’s got a lot of talent to offer, and Adam & Eve does an amazing job of exploiting that talent without overextending our leading man.

In three versions of “Boom” – a remastered cut, a “Love Version” and a mix appropriately-titled “The Explosion” – the structure of the music remains relatively the same, but with a couple of big cosmetic differences. “The Explosion” rallies together synthetic components with an entirely organic vocal where “Love Version” takes it old school with an instrumental focus that strikes me as being a touch more evocative than verses ever could have been on their own, with the remastered cut serving as a fair middle ground between the two conflicting concepts. Together, this trio of tracks shows off a lot of depth in HeIsTheArtist, which, for a venture limited to six songs and seventeen minutes in total length, is a more than desirable result for any independent performer.

An inviting and surprisingly warm effort that appeals to R&B fans as much as it does the curious alternative pop fan, this college radio-style introduction to HeIsTheArtist’s sound is probably one of the smarter records of its kind you’ll be able to acquire before the summer has come to a conclusion. Adam & Eve pushes the envelope on several aesthetical fronts, but for what it lacks in mainstream varnish it more than compensates us for in sheer originality, which is a tradeoff I would take any day of the week. There are quite a few alt-R&B players making some quality noise in the American underground this season, but if you’re looking for premium-grade consistency on a single disc, this is probably an EP you’ll hold in high regard.