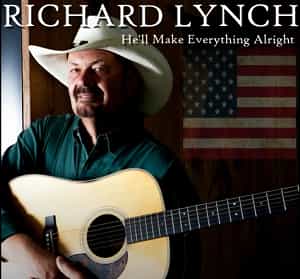 Richard Lynch comes across my desk with a lot of career behind him and in front of him as well to talk write home about.  But the multi award winning, chart top 40 topping country singer/songwriter and host of The Traditionally Lynch TV and Radio shows needs no introduction.  That is unless of course you either do not like country music, or you have been hiding under a rock according to the Nashville music scene where Lynch and his band are highly ranked in the live music circles among the greatest around.  There is no better place to hail from than Music City.

“He’ll Make Everything Alright’ could read like a fairy tale or a fantasy line, but it’s more innocent than it appears, with a solid message for the kids of today and the older generation as they watch the spirit of America fall into its knees on the news.  An artist can either take that and turn it into something positive or let it turn off their light, it is a risk any artist should take if that is what is inside them and they want to get it out.  The timely manner in-which Lynch releases this single is important to its overall message of peace. https://open.spotify.com/album/6IAu4asTXW7kdmPgsEQhGK?%3F=

This single comes after a string of successful chart-topping number by Richard Lynch and it comes to serve as another sign for both the artist and his fans, the country music masses.  I was not familiar with this fine Ohio Country Music Hall of Fame treasure but after hearing “He’ll Make Everything Alright” I went on an exposure trip and loved what I’ve heard so far by him and his band.  Everything checks out as if I had heard him for years already, as it turns out some of it I have, but not his more recently hot singles in the charts.

If I were to guess who the “He” is in the song, it would not be anyone of leadership on the ground but in the sky, so it is safe to report this is not a song with any political purpose, but it is a song with spiritual purpose.  You can also say that it is not, but I am sure Lynch would argue that if he had to.  “He’ll Make Everything Alright” is a good indication that the right guardian angels are out there.

If “He’ll Make Everything Alright” isn’t about waving any magic wands, it is about coping and resting assure that something or someone out there has your back in the middle of the morning, noon and at night.  It is about fighting the good fight, not dwelling on the bad but knowing the good always prevails.  Musicians can always put it in a song, and this one helped bridge a gap for me that was missing because the name Richard Lynch had not yet come onto my radar but where has he been was the first thing that came to mind.  This song is also destined to win him more awards and chart placement.