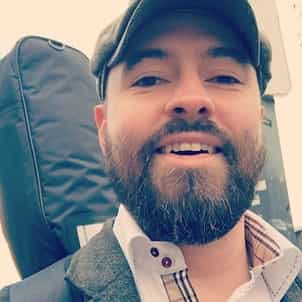 Smile While You’re Wasted is the new album from Austrian singer/songwriter Marc Miner. The personality-filled Miner and his backing band unleash a fiery, fun mix of country twang, rockabilly and folksy fun in 11 smattering tracks. Sure to get you boot scootin’ across the dance floor and raise your beer glass in the air, Miner taps into the merriment of music to ease the troubled soul of a listener on the lookout for something unbelievably new. It’s in Smile While You’re Wasted that this particular listener has found the cure.

I guess you could almost call Miner the outlaw country version of Marcus Mumford. Besides both having double-M initials, Miner possesses that undeniable personality and rare magnetism. When Miner sings, it’s like he’s part Cajun, has a chunk of chew in his bottom lip and he’s just smoked his 12th cigarette for the day. I loved the character in his voice, the hue of the Bakersfield Sound transported to a European village. Now based in Vienna, Miner’s passport has featured numerous visas, including a sojourn to America where the Rocky Mountains and Appalachian sounds caught his ear. After a gambling addiction landed him in trouble with the law, he’s back permanently in Vienna.

Knowing Miner’s ‘outlaw’ vibe definitely gives him some street credit, much like the brooding, edgy Johnny Cash and Merle Haggard collections, but in Miner’s case, it also suits him in that it makes his songs sound all the more richer. He’s enjoying himself because he’s had his freedom taken from him. When you hear the first track, “Warm Welcome” Miner immediately establishes his point-of-view that he’s been an outsider and treated as such. You got the hottest welcome smile I’ve seen in a while, he sings in his deep tenor. The blazing, melodious electric guitar and fast-paced drums fill the space. A hush of an electronic organ fuses into the undercurrent. This song starts the party and the drinks don’t stop flowing.

“Border Town Bar” is fast-tempo, heckuva ride. We try to keep it in lane, so we drive that old vessel quite slow, if the engine will explode, you’ll find us by the road, with a smile and a thumb asking to be towed, get on rolling down the highway to the next little border town bar, Miner sings in this ode to life in a touring band. “Easy Street” has a Jimmy Buffett-vibe, and totally unexpected conga-like drums. By the time “Everything But Modest” and “Whiskey & Weed roll around, as a listener, I became more and more impressed with each track. From the sweet, steel guitar twang, to the honky-tonk tones, it’s still no match for Miner’s storytelling. As the hits domino, “Sweet Codeine”, “Empty Bottle Blues” and “Strip You Down” showcase Miner’s intuitive arrangements. These songs are full with exciting music beds and intricate textures that Nashville should be taking keen notice. I try my best so don’t push me away…strip you down to your soul, Miner sings, the slow-dance “Strip You Down”.

In the last three tracks, “Nothing Good ‘Bout The Way I Live”, “Over” and “Last Words”, Miner says it best when he sings as long as I’m around, I’ll enjoy every moment here. Rather than worry what your last words are going to be, or plan so much in life, just live in the moment, he echoes. All of the songs on Smile While You’re Wasted are worthy moments. Marc Miner delivers one of 2020’s best albums.