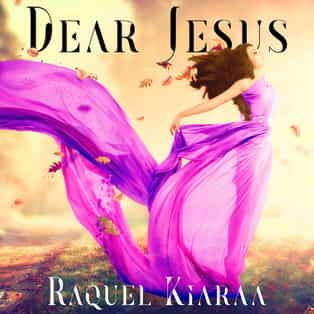 There’s an ephemeral humming before a piano strike before the titular title is said by singer Raquel Kiaraa in her new song “Dear Jesus”. It sets the stage for the almost holy ambiance it makes you feel like you’re in a place of faith whether a chapel, or nature, it’s a place higher than yourself. Kiaraa’s voice, in the beginning, feels slight and humble, yet beautiful as she states that she wants to have a conversation with the big man upstairs. She expresses her troubles with her own feelings and as though she’s been forgotten.

With each line, she admits another trouble she’s going through from her parents to herself. It’s instinctively compelling material since it feels like it’s coming from a place of truth, which in a way, it very much is. Raquel had an injury halt a burgeoning athletic career and you can almost immediately tell all of these lows she sings about comes from a real place she’s been able to repurpose into this song. She even acknowledges that she’s not a religious person, but has instinctually followed her own faith but she seems to get nothing out of it despite giving it her all. This is all backed by some beautiful instrumentals from the electronic drum and bass plus the subtle electric guitar strings that slowly grow stronger as the song progresses. This is a single that feels very confident despite being so vulnerable with its audience.

This is a beautiful anthem for those who are in the proverbial pit right now. It’s very hard to criticize a single sometimes because it’s something to be taken as a piece of a larger puzzle and if this is an indicator, that will be one hell of a masterpiece puzzle. There’s nothing cynical about Raquel or her brand that she’s creating and a part of that I have to assume comes from how she’s been in charge of her own brand since she got into music at the age of 32 (she cites Leonard Cohen, a role model for her as one of the reasons she felt strong enough to make the leap at this stage in her life as he did the same at that age), having marketed herself and selling out her own shows that she promoted.

She’s definitely an inspiring figure for any person who’s thinking of making a name for themselves in an increasingly overly saturated musical world where quantity often outways quality, but Kiaraa has integrity. This immediately makes me excited for an upcoming album that hopefully won’t take too long to see come to fruition. It checks the boxes off for anyone looking for a new unique musical experience. Wonderfully performed, mixed, and mastered to perfection creating a distinct sense of atmosphere and intimacy. One of the most exciting parts of new talent appearing is that they’re a blank slate and no matter what she’ll reappear with it, it’s a piece of a larger puzzle as to who Raquel wants to be because she’s listening to herself.