“YOU ARE BEING LIED TO!” (single) by Mold 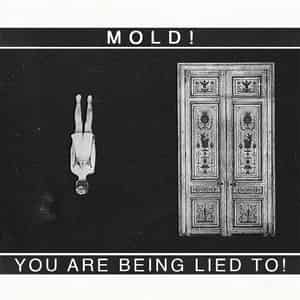 I think we often associate the feelings of paranoia in music in very simple ways. There’s a kind of skitchy stretchy and uncertain sound that permeates a track, but what would happen if you took those feelings, but combined them with the mellow tunes of someone like Toro Y Moi or the early days of Vampire Weekend or We Are Scientists? You end with the band Mold! and their new single “YOU ARE BEING LIED TO!”. It’s a fantastic debut from an indie act that’s taking this incredibly seriously, and it shows in the song.

There’s a fresh-faced feeling to it, but it never feels amateur and I think a big part of it is because of the individual strengths of each band member as they swirl together in a cosmic sound that perfectly encapsulates doubt, lust, fear, and honesty. These are ideas and tropes that we’ve definitely heard before, but an astonishing thing is a way the band makes it feel fresh. It reminds me of the first time I heard an act like LCD Soundsystem and thought “Wow, these guys are just going for it.

They’re not at the flawless peak yet, but they’ll be there before we even know it.” I know all of this sounds like high praise for a first time act, but stranger things have happened. Sometimes as any music producer will tell you when you hear a hit, you just know it. The band knows who it’s aiming for and focuses on with laser-sharp lines and feelings that perfectly describe all the feelings we don’t want to address within ourselves and others normally. If there’s any weak point is that sometimes the song can come across as just noise for some, especially in the middle, but I think it’s by design.

The escalation the song builds is just perfect and the flow is impeccable. Big kudos to the guitar and percussion work for feeling both flowy but grounding the song so it doesn’t go off the rails with its loose and sometimes experimental-sounding nature. I highly recommend watching the fantastic and charming accompanying video. From a concept from video director Gabriel Duque and the band themselves, they have a kind of fun tongue-in-cheek aspect to them that never feels “twee”. The video which sees a fun group of makeup clad almost modernistic geishas or geisha-inspired tear a pair of friends apart from each other and force them to duke it out in a boxing ring.

Yeah, it escalates pretty quickly. It’s over the top and yet somehow feels incredibly real and the directing and cinematography is light and bouncy in a way that perfectly complements the beach mist vibe