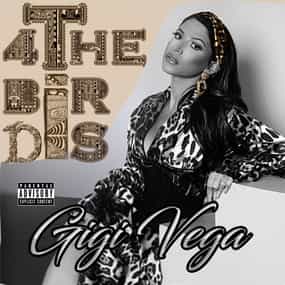 At once, both urgent and relaxed enough to establish her confidence in the song right from the start, a sexy rhythm embraces us wholeheartedly in GiGi Vega’s “4 The Birds” and refuses to let go of our hearts for the duration of the track’s three-minute running time.

The righteous rhythm in “4 The Birds” isn’t completely percussion-driven; if you want to find the source of the real tempo-setter in this track, you’ve got to start with GiGi’s lead vocal. Her bond with the beat is so tight that it becomes quite difficult to tell how much of the instrumental luster is in fact aftershocks from her crooning, which is an impressive measurement of her potency in the studio.

These synth parts are tastefully sewn into the fabric of the harmonies and used as a brilliant bridge into the chorus, which is the only purpose they should serve in a song of this type. The guitar owns the backdrop despite its minimalist role, and this is likely because of how warm a voice GiGi is giving up in her harmony at the climax of the track. She really shines in a barebones setting, and I don’t see many critics debating as much when “4 The Birds” finds its way onto the upper half of the pop charts this summer.

It might be interesting to hear an acapella version of this single at some point down the road, really for no other reason than to get more out of the lead vocal GiGi is presenting us with. She’s going fairly raw in the mix to preserve the athleticism and emotionality in this performance, which is quite admirable when taking into account how few of her peers have considered going completely unfiltered in their own work this summer. Her voice is all she needs to dunk on the competition, and that’s largely a point of emphasis in this latest studio cut.

GiGi Vega sounds much more mature and concise in her execution in this follow-up to her surprise indie smash with TEC “Watchu Tryna Do?,” and based on the growth she’s exhibited this year alone I think she’ll be turning a mainstream corner in her debut album where others will struggle to meet the same milestone in a similar amount of time. “4 The Birds” is demonstrative of her immense versatility as a singer and songwriter and gives us a lot to be excited about with regards to GiGi’s future as a rising pop star.