‘Ride the Wave” by Jay Elle 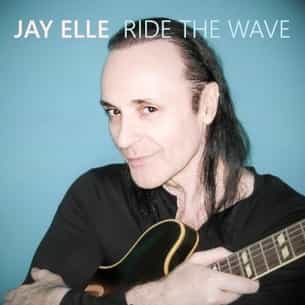 Whether he’s working out a sly groove in “Tequila Kiss” or offering a balladic melody via “Who’s Camille,” singer/songwriter Jay Elle has a pure love affair with the guitar in his new album Ride the Wave. Their relationship is at times volatile – “Rainy Day,” “Better Luck Next Time” – while in others it’s one of the more harmonious in contemporary rock – “Insane,” “Want Me Bad” – but it’s always at the forefront of our attentions in this record, guiding us into the emotionality of the lyrics like no other one-two punch could. Elle has an affinity for a classic strain of rock singer/songwriter qualities in this disc, and as much as other efforts of a similar style might sound like throwbacks to the old school, his is the most modern retro piece I’ve heard this year.

The strings set the tone for the acoustic title track and stirring crossover piece “Angeling,” and the vocal ultimately shapes the story being told even more than the verses would on their own. Although there’s a complex approach to the way some of the narratives in this LP are constructed, Ride the Wave consistently feels more immersive than what the status quo in modern rock has produced in recent years. This is a really connective release that starts and ends with the passions of its creator, and while I wish these weren’t the qualities that make Jay Elle’s new album such a rare find, they’re undeniably the reason this tracklist has as fresh a feel as it does right now.

“She’s So Fine,” “Twelve on Sunday,” and “Miss Mess” have an old school rock vibe present more in their rhythm than in the melodic trappings of the music, but the execution we get from Elle himself suggests an experimentalism I would love to hear him expand upon in a future release. He’s got a lot of ambitiousness that he’s only starting to tap into here, and while it doesn’t feel like he’s shortchanging us on any of his raw emotion in tracks like “Insane” and “Angeling,” one can’t help but wonder what kind of magic he could stir up if allowed to really push himself – and the recording studio – as far as he can go.

Jay Elle is keeping the AOR singer/songwriter flame well-lit in Ride the Wave, and if you’ve yet to hear his work prior to now, this could well be the perfect effort to get you intrigued by his music. He’s got a lot of elements within his style that could be unfairly characterized as a direct homage to the old fashioned players to have come before him, but to me, I think there’s too much personality in his work for any real critics to dismiss the work he’s putting into this record as anything but heartfelt. It’s a meaningful piece that sounds like it’s been sourced from his soul rather than from a random slew of ideas that seemed marketable at the studio stage of the recording process, and it’s one of my favorite new LPs out this August.