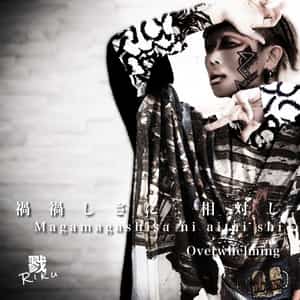 Epic vocals are the cornerstone of Riku’s sound, and in his new single “Overwhelming,” you could say they’re as epic as any of the potent rock n’ roll instrumentation behind him and be completely right. There’s righteousness to this track that I haven’t heard as much of in his other content, and it starts first and foremost with the dynamic way in which he layers his vocals beside the crushing guitar element in the mix.

There’s a certain amount of calculation coming from behind the board, but don’t get it twisted – “Overwhelming” is a showcase of Riku’s organic virtuosity more than it is his ability to secure a top-quality production when he needs to. The hard rock backdrop he’s afforded his vocal harmony in this piece suits the arena-filling presence he’s had in the last couple of songs I’ve heard from his camp, and better yet, I think it’s presenting us with the fiercest collection of beats he’s straddled from behind the microphone thus far. He’s got a skillset that can do some amazing things, and it isn’t being neglected nor left under-exploited in this performance by any measurement.

The physicality of the bass and guitar componentry in this single feels really natural and not necessarily boosted by the EQ exclusively – truth be told, I would actually say that the percussive element does a lot to give the string play a helping hand when Riku’s voice becomes rather overpowering in comparison to the other parts in this arrangement.

As the title of this track suggests, going a little further past the typical line most bands and solo rockers try to stick behind is the name of the game in “Overwhelming,” and judging from the fact that Riku seems to deliberately put himself in as pressurized a position as he can here, I’d assume he thrives on this kind of a setup. He’s got a fluidity to his performance that doesn’t feel like the product of a fanciful pose, but instead a combination of confident songcraft and an integrated mix that puts efficiency well above anything else in the music. This is thoughtfully made material, and you needn’t be a professional critic to recognize as much when listening to this hot new single.

Riku is sounding as forward-thinking as ever in “Overwhelming,” and the growth he’s showing off alone should be enough to get a lot of new disciples more than a little excited about the music he’s making at the moment. There’s been a lot of emotionally charged new content coming out of the woodwork in the American, Asian, and European undergrounds over the past couple of years, but this has such a distinct vibe that I wouldn’t necessarily lump its aesthetics in with any one specific movement today. From where I sit, Riku is developing something that really is his own and no one else’s, and because he’s got the kind of fight in his attack that he does, I believe he’s going to continue making smart singles that are an outlet for all of his brilliant emotionality.