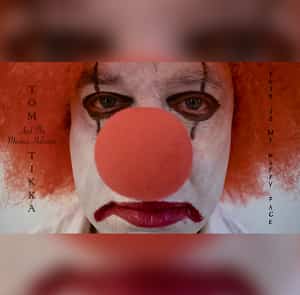 “Bullet in the Head” is a song that may cause many listeners to flinch. Few, if any, will be able to recall any album opener confronting such a difficult topic like killing yourself. It isn’t a broadside set to music, however, and the humanity of both the words and musical arrangement satisfies despite the downbeat theme. There’s no doubt that Tom Tikka and the Missing Hubcaps contemplating death such as they do during their new album This Is My Happy Face isn’t for everyone. However, there’s equally no doubt that Tikka has extended himself. He does as much as possible to capture the widest possible audience without compromising his vision.

It isn’t aggressive, however. Tikka doesn’t belt out the words for “Bullet in the Head” in any sort of threatening way but there’s no doubt the lead vocal has a matter of fact quality. It clarifies the reality of its subject matter without ever dwelling on it. There’s little doubt hearing it that Tikka didn’t compose it fully cognizant of its possible effects on listeners. It definitely works as the musical equivalent of kicking a door in – few modern releases begin so uncompromisingly.

“Heart’s On Fire” is another high point on the album. The Missing Hubcaps rhythm section is very effective during this song, especially the bass, but the drumming is powerful. Tikka and his band mates incorporate keyboards/synthesizers into the album’s songs with finesse, but Michael Stover deserves credit as well. The producer possesses a sharp ear for bringing guitar and electronic instruments together.

Acoustic guitar begins “Doormat” in mildly unexpected fashion. His willingness to introduce different instrumentation as the album develops is more evidence of his daring. Tikka’s ability and often eagerness to change things up keeps the album interesting for longtime and first-time listeners alike. The lyrics don’t mince words while still retaining the intelligence heard in each of the album’s ten tracks.

“(I Wish I Could) Fly to the Moon” plants its flag in rock territory but makes understated gestures to pop sensibilities as well. The chorus, without question, is among the album’s best and the vocal phrasing he adopts during the verses serves him especially well during this important moment. The theme of escaping the woes of awareness and existence is a wide-ranging subject nearly everyone, to a greater or lesser degree, will relate to.

“Hunger Lines” is an absolute stomper in some ways showing his energies undimmed late in the running order. The wah-wah spiked guitar draws blood numerous times during the course of the track and its sleight of hand opener, echoing classical instead of rock influences, provides the track with a ear-grabbing intro. Tikka revisits many of the same themes over the course of this collection, expanding on initial observations, adding new details, and each listen reveals something new. The ultimate impact of Tom Tikka and the Missing Hubcaps’ This Is My Happy Face is cumulative rather than dependent on a handful of moments and that deepens its long-term value for music fans.