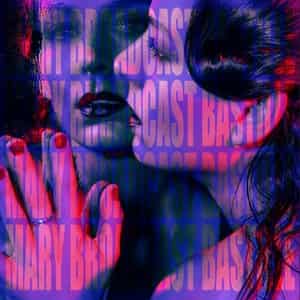 Self-discovery can often include a lot of conversing with deities and an internal quest for understanding, and when the subject is broached so vividly in the song “Bazar” from Mary Broadcast’s Panic, we’re reminded just how personal the journey to holding a complete psyche is. While she’s pushing the boundaries of what separates the diary entries from lyrics in a pop track here, it’s par for the course in Panic; whether it’s true love in “Bastille” or considering complete destruction as an avenue of catharsis in the title track, this is a record that is all about searching, led, of course, but the illustrious lead vocal of Mary Broadcast. She’s going quite dark with this effort, but turning out one of the more surprisingly optimistic and personal listens I’ve heard in years.

The guitar is not nearly as significant a player in this mix as the percussion or Broadcast’s singing is, but there are certain moments in songs like “Sing It” and “Bastille” where the spotlight belongs to the six-string alone. I love how willing this singer/songwriter is to spread as much of the energy across her music as possible as opposed to centering all of her expressiveness on the tone of her voice alone – compared to what a lot of her rivals in American indie pop have been doing lately, this is a clear sign of her disinterest in the singer-centric personas populating the Billboard charts in 2021 and 2022. She has her own message to share, and that’s perfectly clear here.

As bewitching as the undertow of “Zone 4,” “Aver,” or even “Bazar” are, there’s no disputing the real star of Panic’s tracklist – Mary Broadcast herself. While she’s hesitant to use her voice as the primary facilitator of emotional output in this record, she’s also unable to stop the charisma she presents just with her presence in songs like the title track, which winds up being one of my favorite attributes here. This would not be the same extended play with a different singer at the helm of the material, and I would go so far as to argue that the lyrical narratives simply wouldn’t sound as awesomely precise and fluff-free as they do when conveyed through a voice as decadent as hers is.

It’s not a stretch to say that Panic was partly made for the discerning progressive pop fans more than it was other audiences, but this doesn’t discount the general accessibility all six of its songs are sporting. Whether you’re new to her music or have been listening since the release of her debut album some seven years ago, Mary Broadcast is a vocalist and creative mind that you should be paying attention to out of the European underground in 2022, as what she’s working with at the moment has the potential to really breakthrough on both sides of the dial and influence a moment in the history of pop music that needs more exciting, unfearful players offering their two cents on the future.