New York-based Norman Alexander draws attention to every milestone he carries out. 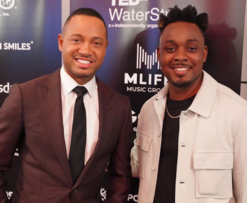 Norman Alexander makes some significant progress with his latest single ‘The Reason.’

The unwavering musical aura of Norman Alexander is spreading even far with his latest musical activities. The latest music video, ‘The Reason,’ has premiered with an official music video that garnered over a million views in just 12 days. Aside from the track ‘The Reason’ creating a massive buzz in the music industry, Norman also caught the attention of the former E! News co-anchor Terrence J in the recent event of TEDxWaterStreet’s annual spring event. Norman was featured in the show and set the stage on fire as a return performer, coming for the second consecutive year. The artist possesses exceptional vocal skills that meander through the whole soundscape and soothe the souls of the listeners.

Norman also performed on July 20 at SOB’s in New York City, and the listeners undoubtedly enjoyed it. SOB’s has featured numerous well-renowned artists in the industry before, like Drake, Justin Timberlake, Kendrick Lamar, etc., many others. Previously, Norman has also worked with three-time Grammy award winner Randy Merrill for his hit single ‘No Goodbyes.’