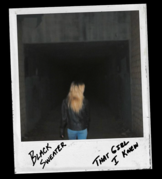 It’s rare that an album like That Girl I Knew by Black Sweater would require a parental advisory sticker, but that is sure to be the case. Essentially a 16-track review of a break-up with blow-by-blow commentary, That Girl I Knew is a rather gentile-sounding record. However, there are moments that see outbursts of internalized rage and confusion. Black Sweater somehow combines several aspects of multiple genres into a solitary effort that ends up feeling and sounding rather familiar. The brilliance of this album lies within its emotional complexity and subdued delivery.

Black Sweater utilizes a very distinct guitar style on That Girl I Knew, with liberal doses of palm muting and a jazzy texture. This is evident in “Speak To Me,” a well-crafted piece that is defined by its guitar and vocal work. The vocal performance on this one is particularly prescient and foolproof. Also hallmarked for its guitar work, the album closer, “Who’s To Blame,” features some aromatic drumming as well. This is the closing act of That Girl I Knew, and it seems that our narrator has finally reached a place of acceptance and renewal.

An attractive but haunting piano riff opens “Street Lights,” which ends up sounding as if The Fray developed a Pop-Punk fixation. This one plays out like a collection of random thoughts, some of which probably shouldn’t be shared. You just bring me down/what can I say to drown you out/I don’t make a sound/why do you talk so fucking loud? “Crimson Colored Carpet” comes around the middle of the album and picks up the tempo, considerably. Lyrically, this track is raw and unfiltered, and some may find it polarizing.

“Insane” boasts a catchy chorus and, in a nutshell, is a protest against gas lighting. “Moves Like You” features some of the most standout bass playing on the record. In many ways, it is the quintessential Black Sweater track. “Images” and “Reminisce” are instrumental tracks that are presumably meant to be palate cleansers and to break the monotony. Both are ear-pleasing, with a sense of foreboding earmarked by their brevity.

“What To Say” feels like something of a waltz, with its classical time signature. There’s not much meat on the bone with this one, but you won’t hit the skip button either. “Stream Of Consciousness” is the first track to show even the faintest hint of a Hip Hop influence. It’s got a modern feel and could likely stand up to most of the top-earning Pop acts at the moment. On the flip side, “Pretty Lonely” is gritty and straightforward Pop Punk, sure to satiate the less romantically inclined.

That Girl I Knew reflects the artists’ conflict with the timeline of this relationship and how its duration took its toll. This is a strong debut for Black Sweater. The album is now available on streaming platforms.