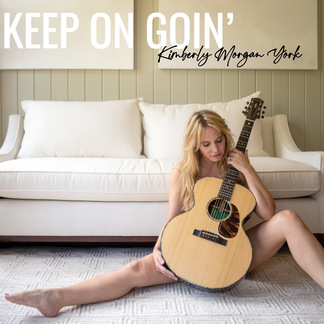 The cover of Kimberly Morgan York’s new album Keep On Goin’ says it all – this is a record that’s all about a player and her guitar, and she wastes no time proving as much in tracks like the title cut, “Kick Us,” and “Ruby.” York experiments with the depth of her compositional wit, but always within boundaries as they’re created by her six-string counterpart, and from what I can tell, there isn’t much she wasn’t willing to try if it meant adding some expressive definition to the harmonies in this LP. Keep On Goin’ is affirming of style, but moreover, it’s strikingly immersive for the passive listener and serious fan the same.

In terms of its greater theme, this is a record that finds continuity more through the tone of the music than the narrative presented by the lyrics, which might be the best way to tie a tracklist together. York is so seamless in her delivery throughout Keep On Goin’, but “Three Chances,” “Your Fool,” and “Love Songs” are some of the best examples of her calmness under pressure. No matter the style of the arrangement, she’s quite comfortable with the studio here, and arguably sounds more at ease with her surroundings than some of her more experienced rivals do this summer.

There’s an undeniable search for calm amidst all of the implied chaos in “Fallen,” “Another Lover,” “Sharing the Night Together” and “Numb,” and it’s in these tracks that we start to see just how vulnerable a look this is for Kimberly Morgan York. There’s nothing getting between her storytelling and the audience other than a slew of string-born harmonies as fetching as they are intricately designed, and it’s only in the heat of the moment that we’re able to appreciate just how little she needs to rely on the compositional predictability of her competition.

I hear a lot of live potential in “Your Fool” and “Love Songs,” and really all of this material would probably have an easy time lighting up whatever stage York performs on. She’s got such a likable, easy-going sensibility to her, and when it’s presented against the minimalist backdrop we’re hearing in Keep On Goin’, it’s all the easier for us to enjoy her humble tone as a performer. This is a rare attribute to come by anymore and by far one of the most exciting elements of this record even after a few listening sessions.

Avoiding the ornate compositional elements a good chunk of her peers are using when they sit down to make music this season, Kimberly Morgan York creates a gem of an offering in Keep On Goin’ that really embodies all the best charms of the Americana revival movement in 2022 without stumbling into the alternative country catastrophes that have befallen some of the genre’s most intriguing and inspired acts over the past couple of years. This is more focused than anything in the status quo category, and I can see why so many people are abuzz about its release this month.