Karim Baggili’s latest effort, Kali City, features Le Trio Joubran. The first few efforts of the album (Down Town, Ella & Jad, Dawn at Sea, Big Fish, and Silent Stories) provide listeners with a stellar introduction to Baggali’s unparalleled approach to world music. Arabic Circus is a stellar effort in terms of how taut the instrumentation is, while there is a fun and playful sound that is cultivated by the interplay of the instrumentation. Baggali’s tracks on Kali City are able to possible considerable narrative qualities, taking listeners through an entire story by the interactions between each musical element. 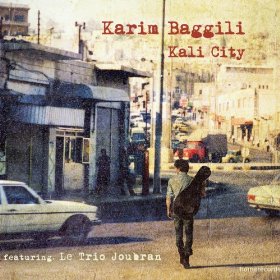 Late-album tracks are surprisingly strong on Kali City; Nuit Obelaetis is a tremendously emotive effort that succeeds due to the drive and insistent momentum put into the track. The arrangements that are present on this album showcase nuanced, dense movements that are continually shifting, establishing a very spontaneous (yet utterly refined) sound to Kali City. La Tinsini is one of the shortest compositions on Kali City at 2:56, but Baggili tightly winds the track to provide a much longer lasting effect on listeners, who have to unravel each note to properly understand Baggili’s intent.

Amar is a track that has a very timeless sound, with a middle eastern feel placing this firmly in the sixties. Baggili’s talent ensures that listeners that are into contemporary music will have more than enough to sink their teeth into. Kali City is an album that touches upon a wide array of styles, approaches, and overall sounds, ensuring that listeners will be able to spin the title numerous times. Make sure to visit Baggili’s domain for additional information about Kali City, live tour dates, and other news updates.