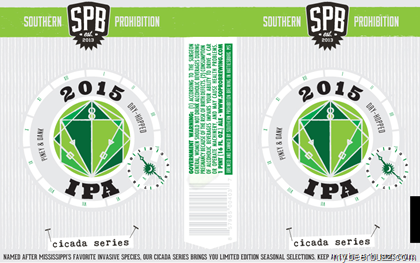 Southern Prohibition Brewery’s 2015 IPA is a fruity, hoppy bomb that possesses the perfect alcohol bite. The beer pours with a brownish-orange color and a thick off-white/yellowish head, with a nose that ties together hops, malts, and citrus fruits in a nice bouquet. Lacing will stick to the sides of a glass long after a pounder has been completed, providing information about how large of pulls one has taken from this India pale ale. The sweet/bitter dichotomy is perfect here, with sugary elements leading off each sip before yielding a strong, assertive set of pine and hop notes that act as a palette refresher. The array of flavors present in the 2015 IPA changes as the beer continues to warm. Individuals that come into possession of a can of 2015 IPA would do well to evaluate large and smaller sips, as the amount of liquid that one takes in significantly changes the overall taste of this brew. A smaller sip brings spicy, fruity, and hoppy efforts to the forefront, while a larger quaff allows the malt and grassy elements to immediately show themselves before yielding to a malt-heavy experience.

The alcohol presence (7.7% ABV) peeks its way through as the beer reaches 50 degrees Fahrenheit, while the sweet aspects are much more commonplace at points after that. One or two cans of Southern Prohibition’s 2015 IPA should make for a stellar night; the beer works perfectly warming up imbibers during the colder summer nights and will quench thirsts perfectly on those hot, hazy days.

The 2015 IPA is available in 16-ounce 4-packs, and is a seasonal effort in the brewery’s Cicaca Series. For the full array of information about Southern Prohibition Brewing, visit their domain. We’ve review Southern Prohibition’s Mississippi Fire Ant.