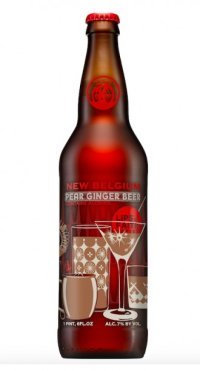 New Belgium has released a Pear Ginger Beer to their Lips of Faith line that is wholly distinct from any other beer that we have had the pleasure to review this year. The beer pours with a golden to orange brown color and a small amount of light beige-colored head that makes its way down any glass into which it is poured. There is a small amount of wheat and pear nose to the offering, but it does not indicate the depth of flavor that is present in each bomber. 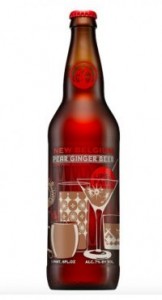 The pear brings sweetness while the ginger adds a spicy bite; this is an adult ginger ale that has enough complexity in the overall set of flavors that one will want to continue drinking from beginning to end. The burn of the alcohol and the ginger presence acts as a palette refresher, meaning that the beer at its initial temperature will be considerably different than it will be when the Pear Ginger Beer continues to warm. After a few minutes, a more perfume-heavy and grain-dominant flavor becomes evident. The alcohol intensity that initially presented itself during the early sips of New Belgium’s Pear Ginger Beer disappears completely to provide additional highlighting of the grain and citrus elements that experience a renaissance at this later point. Pear Ginger Beer is an effort that is exciting and represents something that is wholly different from beers that are cluttering store shelves. As such, it desires the Lips of Faith designation; new Belgium has brewed a winner here.

The Lips of Faith series are seasonal offerings by New Belgium; for more information about the brewery’s full product list, visit their domain. We have reviewed New Belgium beers in the past; Rewind IPA , Gruit , and Rolle Bolle.