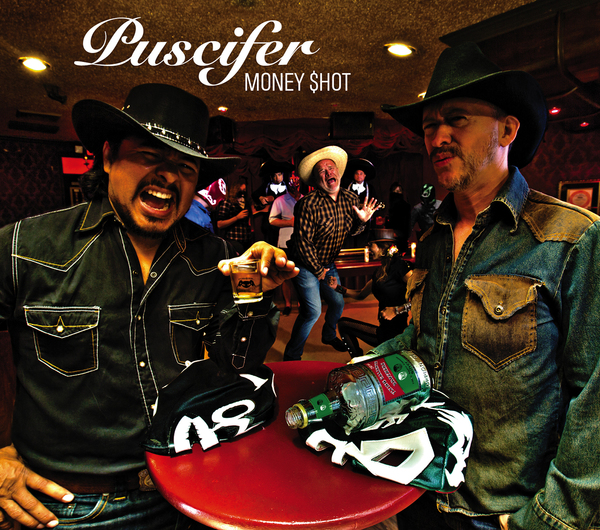 Puscifer, who recently announced a new album, Money Shot (Oct 30, Puscifer Entertainment), and the release of the “Grand Canyon” video, will be returning to the road, kicking off a six-week outing on Nov. 1 at the Monster Mash Festival in Phoenix.

“As is the Modus Operandi of Puscifer, there will be a whole new show to accompany the Money Shot release. We’ve been leaving a few clues here and there as to what it may entail,” said Maynard James Keenan.  “As usual, we prefer to Show rather than Tell. Odds are if you’ve been a fan of the diverse nature of our performances in the past, you’ll want to go ahead and place those bets.”

It’s no surprise that Keenan choose to debut the electro rock band-meets-comedy troupe on a Las Vegas stage (Puscifer’s first shows were at The Pearl Theatre in the Palms Casino).  In the intervening years, we’ve met a cadre of characters including Billy D and Hildy Berger, Major Douche, Peter Merkin and spent time around a campfire, with an Airstream trailer in the background, as audiences enjoyed a Sonoran sunset.  Puscifer, who thrive on the element of surprise, have revamped their stage show, with no spoilers to share, we can only say it exceeds the production seen in recent outings.

Money Shot physical pre-order packages are available now via Puscifer.com.  The various offerings include both signed and unsigned copies of the new album as well as an instant download of “Grand Canyon.”

Tickets are on-sale on Friday, Aug. 21 with VIP packages available simultaneously via http://bit.ly/PUSCIFERVIP.