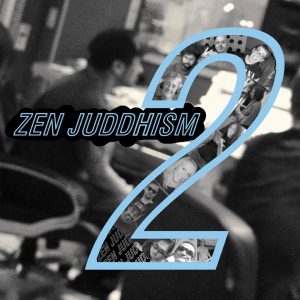 Better Not Wait is the first track on Zen Juddhism’s 2, immediately hitting listeners with an alternative-cum-punk style. The strong females are precisely what will keep listeners on the edges of their seats. This initial effort is further fleshed out through the inclusion of ska-influenced horns, splashy drums and deft guitar work. Stage Fright incorporates a bit more alternative rock into the equation, ultimately spinning the cut into a new direction. Here, hints of surf rock, seventies rock, and reggae can all be discerned. Zen Juddhism keeps the album’s momentum high with their A Murder of Crows, a must more gritty and hard-hitting track.

A Murder of Crows is a high-water mark for Zen Juddhism on two, coming forth with an emotive form of rock that is much different in sound from its beginning strains to its final notes. They Live brings back to the style initially crafted by Garbage and The Unicorns; a bit of sun-drenched California rock showcase the sheer depth of the influences that are at play during 2. Journey to the Centre is the rare-example of a top-tier track placed at the latter section of an album. Whether it is the fuzzy sound reminiscent of The Minutemen or Husker Du or the gritty vocals laid down, fans will absolutely dig this cut.

Purple Friend is the final effort on 2, and the more-acoustic, stripped-down style of Zen Juddhism is matched up perfectly with a more stream of consciousness rap. Taking up all of these standards at the concluding statement of the album, Zen Juddhism further obfuscates the path that the act will take up on the follow-up to this release. A solid album from beginning to end, 2 will hold up to repeat spins.

Top Tracks: Better Not Wait, A Murder of Crows