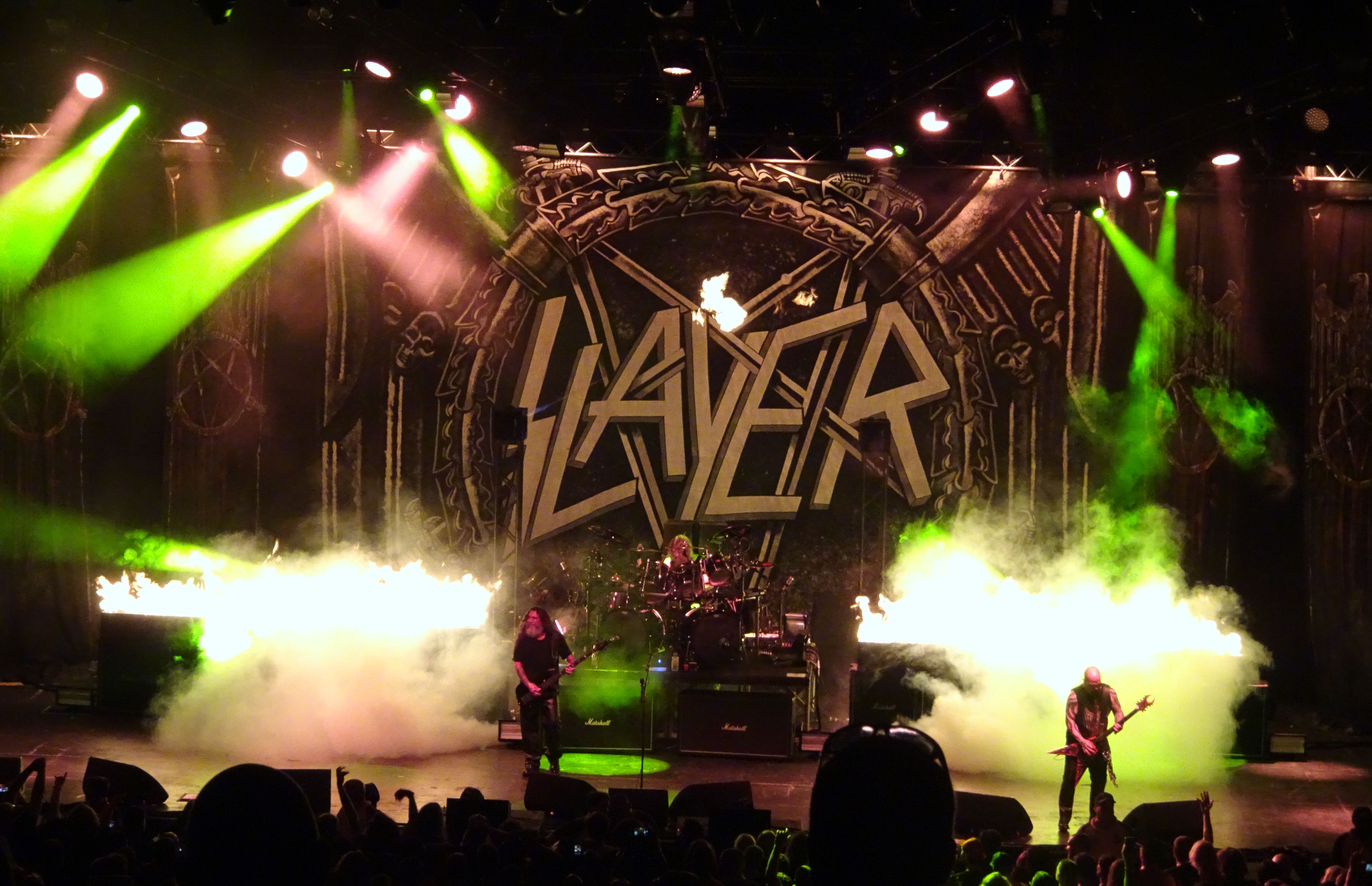 When this year’s Slayer tour was announced I was on vacation out at sea on an eight night cruise and got the fan club email after the various presales and general ticket sales had already started (which translates to all the good seats were already taken – since I am now older, wiser, wear glasses and no longer consumer adult beverages I opt for a seat at shows instead of the general admission pit). The closest tour date was in St. Augustine, just over three hours away, but with the announcement of Lamb of God opening AND going on hiatus after this tour, as much as I wanted to go see this pure thrash metal combination I just did not see it happening.

Alas, my friend Bob had tried frantically to reach me the day the tour was announced and after multiple unreturned texts and voice mails he deduced that I was away on a cruise (the only time I am totally out of communication for that long) and went ahead and secured us tickets. Bob was the one who introduced me to Lamb of God in 2009 and they quickly became not only one of my favorite bands to listen to but also see live because their shows are nothing but pure in your face metal energy, there was no way he was going to let us miss this show – thanks Bob! It was quite the adventure as this was my longest concert there and back in the same day road trip. Seven hours of drive time for just under three hours of metal brilliance from two of my all-time favorite bands was so worth the trip. We got to check out a killer, easy to navigate and very fan friendly outdoor venue that neither of us had never been to which held just over 4000 people. If it was not sold out it sure looked like a full crowd. Both bands sounded freaking awesome, nice and clear, (we missed the opening band Behemoth but I am sure they kicked ass too) and were loud enough that we both had ringing ears for a while on the drive home. St. Augustine is not a big tour draw for bands and it was apparent to me once Lamb of God started and I saw just how crazy the crowd was going, both in the stands and in what was just an absolute frenzy of a mosh pit in front of me, this was a metal starved town and crowd. We were in the right place because Lamb of God is just ferocious live, with thundering drums and shredding guitars and vocalist Randy Blythe utilizing his self-described ability of “…screaming rhythmically like some sort of terribly wounded, very angry mountain ape…night after night without losing my voice”. I have said this about their (outdoor) shows I have seen before and will say it again, if there was a roof on this place they would have blown it off they kicked that much ass. Their ten song set was filled with my favorite tunes of theirs and each song brought the mosh pit back bigger and more frenzied. I have to share this one moment during the song “Ruin” where this young, shirtless, completely sweaty, and obviously wasted kid was flung from the circle pit up against the rail directly in front of me – just as I was about to move my head to see around him the song’s lyrics began again and this kid literally looked right into my eyes and thru me as if I was not even there, like he was possessed by the music in the moment, and mouthed the lyrics for a few seconds before turning,  head banging and jumping right back into the pit. A little odd some people might find it but that moment brought me back to my youth – being that sweaty, drunken kid just lost in the moment and intensity of the show and getting in there moshing. This was my fifth time seeing Lamb of God and I cannot freaking wait for my sixth! I hope they don’t stay on hiatus for too long.

As the lights dimmed for Slayer to take the stage and chants of “F*CKING SLAYER” begin, the curtains in front of the stage fill with white crosses that transform themselves upside down and blood red before the band’s logo appears and splits to either side. A mountain of metal hits your ears as the curtain drops and the spectacle of these thrash metal titans begins. Opening with the title track of their latest CD, “Repentless”, the entire general admission section became one giant mosh pit and bodies were pinned up against the barrier separating us in the seats. For me this band defines thrash metal and their shows are an experience like no other. The precision in their live performances is just incredible as Gary and Kerry trade solos back and forth. The band sounded incredibly tight, very close to the album recording each song was, the bass was insane and the acoustics were about the best I’ve ever heard at an outdoor metal show. This was my eleventh Slayer show and fourth time seeing them on the extended “Repentless” tour. Also for the first time I got to see them play “Cast the First Stone” off of the new cd. Slayer’s twenty song set list mixed in tunes from their entire discography going all the way back to “Hell Awaits” and was heavy on their staple songs that we all expect and want to hear at a Slayer concert – not many deep cuts, unless you consider the newer ones. Do not get me wrong about hearing mostly the same songs seeing a band live so many times – there is nothing like or that can prepare you for the intensity and fury that is about to unleash as Tom introduces and screams “WAR ENSEMBLE” and

Slayer tears into one of their crushingly heaviest songs and the crowd just goes insane. Literally every song gets the same crowd reaction, just without the special introduction. It was an incredible show! rt of noise ordinance in the area near the venue because the show was over by 10:30 PM. It just made me think how back in the day Slayer would not even come on till 10 PM and here we are on a Friday night ending the show at 10:30. The joke was how “kids have it so easy today…back in my day Slayer shows started at…..” but it did help leaving that early for the trip home.  We made sure to check out the upcoming shows at that venue as Bob and I agreed this was totally worth the time and effort and that we would make the journey again to see a show there. Thanks again for making this whole thing happen Bob. \m/

That quote comes from