The Rolling Stones – From The Vault: Sticky Fingers Live 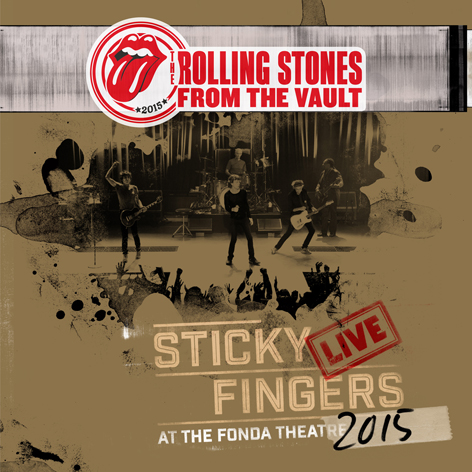 Eagle Rock and The Rolling Stones continue their incredible From The Vault series with this 2015 Hollywood, CA set devoted almost exclusively to the “Sticky Fingers” record.

Kicking into “Start Me Up,” one of the few songs here not from the “Sticky Fingers” album, the band proceeds to play every song off of that classic record, though not in album order.

“We used to make these things called records,” says Mick Jagger, addressing the crowd at the start of the show. “They were round and used to come in carboard covers that people would stare at for hours and make inference to things that were never there.”

The band, playing the first show of their 2015 tour, holds nothing back, playing as sharp and tight (if not tighter) than when the record first came out in 1971. The DVD intersperses the live show with interviews of all band members discussing the recording of the record (and in Ronnie Wood’s case, having to play Mick Taylor’s nuanced guitar parts). There is even an interview with a former Andy Warhol model who claims to be the owner of the crotch featured on the cover of the record… followed by an interview of another Warhol regular who claims that guy is full of shit and clearly lying. Rock and roll is the best!).

“I should have said something before about all the ‘60s drug references here,” Jagger says from the stage before launching into “Sister Morphine.” Bookended by an interview from Richards saying, “This record is pretty much soaked in every drug you can think of.”

And anyone who trots out the tired, “why would I want to see the band now; they’re so old?” clearly hasn’t been paying attention. Five decades on, one of the world’s greatest rock bands is still one of the greatest rock bands. You can put Keith, Mick, Ron and Charlie up against any modern rock band and they’ll still play circles around the young Turks. The proof is all over this set from just two year ago.