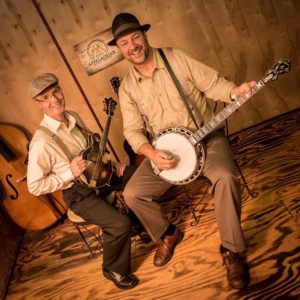 Barry Abernathy and Darrell Webb present Appalachian Road Show, the first joint musical effort between Abernathy, Webb and guest star Jim VanCleve on fiddle, is a multidimensional foray into the realm of bluegrass and its southern relatives constructed out of the trio’s love of the Appalachian landscape, and it doesn’t waste any time dispensing the rich melodies that the region is synonymous with. Abernathy commands our heart-strings with his lightning-fast banjo play, while Webb dictates the soulful harmonies with his mandolin and VanCleve manages the space in between the two. Each one of the songs we find on Appalachian Road Show’s debut affair is styled in a different element of southern comfort, but one thing that they all have in common is their authentic exemplification of country musicianship.

Though “Milwaukee Blues” and “Piney Mountains” are designed on different ends of the bluegrass spectrum, the emotional vortex created by their magnetic lyrics makes them instantly recognizable as being cut from the same musical cloth. Their shared tonality is what makes them the so similar, not their execution of melody. A common theme in this album is togetherness in spite of differences, something that has been holding Appalachia together through thick and thin for centuries, and a fine example would be the eloquently arranged three tracks that we start off with in this record. “Little Black Train” is the darkness of a laboring south personified; “Dance, Dance, Dance” is the bit of joyousness that the culture’s communal unity is known for; and “Broken Bones” beckons a period of discord, pain and suffering that shaped what the whole of our country looks like today. They couldn’t be more different, yet they’re able to affectionately share this album together.

“Georgia Buck” is a great bluegrass shootout that gives “Lovin’ Babe” and “Old Greasy Coat” a run for their money on the sheer strength of harmony, but the latter two are much more sophisticated in their compositional layout. The last song on the record, “I Am Just a Pilgrim,” is much less a bluegrass song and more of a folk ballad, but it also features a classically refined arrangement that is magnified by the slick production. Whoever was in charge of operating the levels behind the glass with this album made sure that none of the instrumentals ever get smashed together, which makes these otherwise elaborately designed songs much more accessible to the typical music enthusiast.

You really get an idea about what matters most to both Abernathy and Webb in this record, and their relationship with Appalachia is portrayed not only through the pointed lyrics and their textured delivery, but also via the unpredictable rhythms that they’re driven by. A song as dexterously gripping as “Little Black Train,” which grows out of the spoken word in track one, is meant to get our adrenaline flowing through its combustible pace, but it’s malevolent lyrics are what really make it as hot a track as a burning ember in the fireplace. I’m impressed with what they’ve accomplished in this initial outing and am definitely curious as to where Appalachian Road Show goes next with this intriguing take on traditional bluegrass music.