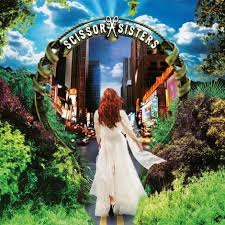 Scissor Sisters eponymous debut created quite a stir when it was unleashed on the world in 2004. It was an odd time for music, with Green going full rock opera on American Idiot, Avril Lavigne doing her best suburban bubble gum punk rock impression and a pre-douchebag Kanye West all competing for the attention of music buyers across the globe. Meanwhile, the New York-based pop/rock/dance Scissor Sisters came out of nowhere with a sound not heard since Queen or Elton John in the mid ‘80s and proved they could turn in one of the year’s best records without bothering to sound like anyone else at the time.

UMe and Polydor have recently re-released this brilliant slice of “don’t give a fuck about what we’re supposed to play” pop/rock on vinyl and the music sounds just as brilliantly jarring as it did 15 years ago. The album was cut at half speed at Abbey Road Studios and is slathered on heavy-weight vinyl which is simply record nerd speak for the sound quality is amazing (and, well, the sound quality is amazing).

The album, which would go on to sell three million copies, was/is a brilliant merging of dance-able classic rock at a time when it was still allowed to be fun, mixed with some disco hedonism (thankfully) and enough modern touches to keep the sound from sounding too nostalgic. Songs like opening track “Laura,” the impossible to ignore “Take Your Mama” and “Tits on the Radio” (no descripting term needed for that one) have held up astonishingly well today. You simply can’t imagine any of those songs not dominating radio if they were to be released today… and if people still listened to the radio.

The Queen and Elton John influences are obvious, but elsewhere, like on the song “Lovers in the Backseat” it’s hard not to hear David Bowie’s inspiration throughout. A decade and a half later and Scissor Sisters’ debut is still one of the most fun rock records to comes out of New York in recent memory.